The latest release within the Royal Canadian Mint’s popular “Exchange $20 for $20” silver commemorative coin program features a special design which pays tribute to the penny.

On March 29, 2012, the Canadian government announced in the budget that the one cent coin would be eliminated from Canada’s coinage system. On May 4, the Royal Canadian Mint struck the last cent during a special coin strike ceremony held at the Winnipeg plant. Current plans call for the denomination to be withdrawn from circulation as of February 4, 2013, although the coins will remain legal tender. 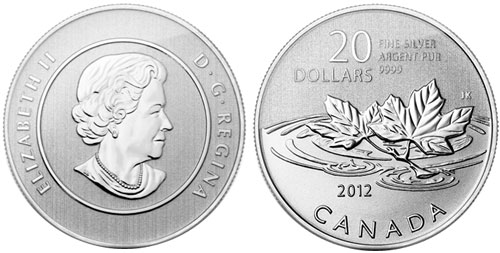 The new $20 fine silver commemorative coin features a reverse design by Jesse Koreck depicting the maple leaf arrangement which appeared on the cent dropping onto the surface of water. Inscriptions include “20 Dollars”, “Fine Silver Argent Pur 9999”, the date “2012”, and “Canada”. The obverse of the coin contains the Susanna Blunt portrait of Queen Elizabeth II.

The silver coins are offered by the Mint priced exactly at their legal tender $20 face value. This concept has proven popular with collectors leading to rapid sell outs for the prior releases of the series. Orders may be placed online at http://mint.ca/

The previous sold out designs within the “Exchange $20 for $20” silver commemorative coin program have featured five maple leaves flowing upwards and into the distance for form a “C”, a young person paddling a canoe with an early native paddler shown in the reflection, a polar bear swimming, and a design to celebrate the Queen’s Diamond Jubilee. The next design within the series will celebrate the holiday season.