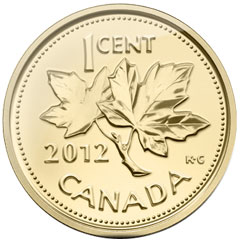 The Royal Canadian Mint saw revenue decline by 36.1% and profit fall by 44.4% during the third quarter of fiscal 2012. The declines were driven by continued weakness in demand and strong global competition in the global bullion market. This was partially offset by the exceptional performance of the numismatic segment which saw revenue increase by 46.5% compared to the year ago period.

Overall revenue from the Canadian circulating segment remained relatively steady during the quarter, although there were some underlying shifts. Revenue from production of coins showed a decline of $6.3 million to $29.2 million for the quarter. This was almost completely offset by an increase in revenue from the Alloy Recovery Program, which was up by $5.1 million to $10.3 million for the quarter. The increase was driven by the launch of a program to recover the alloy from $1 and $2 coins, following the launch of the next generation multiply plated steel versions.

Revenue from foreign circulation coinage fell by 28.4% to $4.8 million. The Royal Canadian Mint cited the economic crisis in Europe, which has reduced the demand for coinage and created a surplus in global minting capacity.

The numismatic segment continues to be a bright spot in the Mint’s financial performance. Revenue increased by 46.5% to $31.8 million for the quarter. The Mint issued 37 new products and achieved 15 sell outs during the quarter. Notable releases included an array of products issued as a “Farewell to the Penny” which included a 1/25 ounce gold coin, 1/2 ounce silver coin with selective gold plating, 5 ounce silver coin, and a silver five coin set featuring all of the designs of the cent through Canadian history.