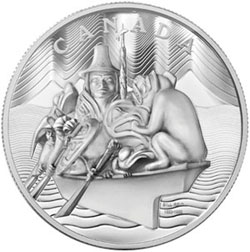 During the 13 weeks period ending June 30, 2012, the Royal Canadian Mint saw a 19.1% decline in revenue to $541.9 million and a 24.8% decline in profit before taxes to $7.6 million. The declines were driven by continued weakness in the bullion & refinery and foreign coinage business lines, which was partially offset by continued strong performance in numismatics and collectibles.

The RCM indicated that the stability of precious metals prices during the quarter depressed demand. The decline from peak precious metals prices served to amplify the impact of the drop in volumes on revenue. The second quarter revenue for the Bullion, ETR and Refinery Business Line was $472.1 million, which accounted for 87.12% of overall revenue.

During the quarter, the RCM produced and shipped 135.1 million coins and blanks to ten foreign countries generating revenue of $5.8 million. This amount represented a decline of 53.6% from the prior year period. The RCM cited the reduced demand for coinage due to the economic crisis in Europe was as the cause of the decline.

Revenue generated from circulating Canadian coinage showed a gain of 10.5% to $32.6 million for the quarter. This gain in revenue came despite a decrease in volume of 59.8% from the year ago period. The elimination of the penny caused the decline in volume, however the introduction of the new $1 and $2 multi-ply plated steel coins resulted in higher revenue.

The numismatic business line continues to be the bright spot, with revenue up by 42.7% to $31.4 million. During the quarter 25 new products were released, compared to 34 in the prior year. Sell outs for the quarter were 21 compared to 7 in the prior year. The Royal Canadian Mint did indicate that they were experiencing challenges in meeting the growing demand for numismatic products. With production and shipping volumes up by about 50% for the year to date, time and resources are being invested to improve overall customer experience.