The Royal Canadian Mint has launched (18th June) the first in a new five coin series of circulating commemorative coins celebrating the 200th anniversary of the War of 1812.

The $2 coin is introduced into circulation commemorating the HMS Shannon, famed for its defeat and capture of the USS Chesapeake and its escort of the American war prize into Halifax Harbour. Honoring the bicentennial of the War of 1812 with this special circulation coin, Canada pays tribute to some of their greatest national heroes and a crucial moment on the road to Canadian nationhood. Key historical figures which influenced the successful fight for Canada in the War of 1812 will also be honored on four new 25-cent circulation coins to be released later in 2012 and 2013. Featured on these four coins will be famed Canadian figures who valiantly defended British North America and ushered 200 years of peace on the North American continent. 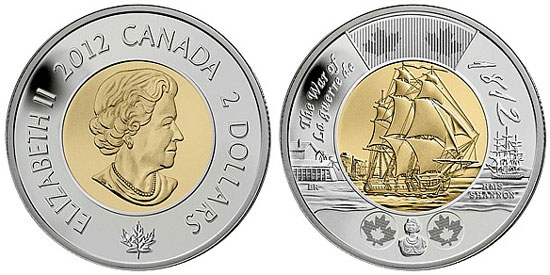 The reverse image of the 2012 two-dollar bi-metallic coin was designed by Nova Scotian artist Bonnie Ross. It depicts HMS Shannon leaving Halifax Harbour to do battle on the Atlantic at the height of the historic conflict between Great Britain and the United States. Engraved at the base of the outer ring is the original figurehead from HMS Shannon’s bow. The outer ring features the text “The War of 1812/La guerre de 1812” and “HMS Shannon”, as well as the initials of the artist. This coin maintains the security-features of the Mint’s new multi-ply plated steel two-dollar circulation coins. Two laser-engraved maple leaves at the bottom of the coin and a virtual image of two maple leaves at the top.

The obverse features the effigy of Her Majesty Queen Elizabeth II designed by Susanna Blunt and the text “CANADA – 2 DOLLARS” is struck along the coin’s edge as well as the Government of Canada’s official commemorative symbol for the 200th anniversary of the War of 1812.

Limited to a mintage of 5 million coins, the HMS Shannon two-dollar commemorative circulation coin begins circulating today. In January 2012, the Royal Canadian Mint also dedicated its annual silver dollar collector coin to the 200th anniversary of the War of 1812 which can still be purchased in both proof and brilliant uncirculated quality.

For more information on this and other coins offered by the Mint of Canada, please visit their website at: www.mint.ca/1812.