Superman, one of the most widely recognized comic book heroes around the world was created in 1933 by writer Jerry Siegel (1914-1996) and Canadian-American artist Joe Shuster (1914-1992). Both were high school students living in Cleveland, Ohio when they created the character of Clark Kent, a mild-mannered newspaper reporter for the fictitious Daily Planet who posseses super-human abilities. The character and his friends were eventually sold to Detective Comics, Inc. (DC Comics) in 1938. Superman was first published later that year and subsequently made hisway into various radio serials, television programs, films, newspaper comics and, in keeping up with the times and technology, onto video & computer games.

Heading the unveiling of the new series was The Honourable Peter Van Loan, Leader of the Government in the House of Commons and Mr. Patrick Hadsipantelis, Vice-President of Marketing and Communications, Royal Canadian Mint. The event was held at FAN EXPO Canada and joining Mr. Van Loan and Mr. Hadsipantelis was Karen McTier, Executive Vice President, Domestic Licensing and Worldwide Marketing, Warner Bros. Consumer Products. 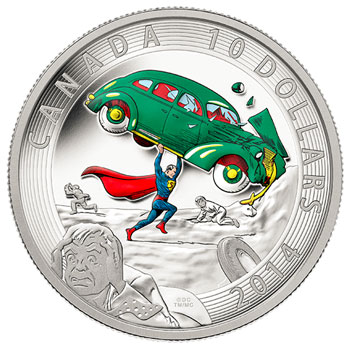 10 Dollars: Recreates the cover of Action Comics #1, which is arguably the most famous comic book of all time. In the scene, Superman foils the attempted abduction of Lois Lane by stopping the gangsters’ green car, hoisting it high above his head and smashing the front of it against a rock. Brilliant color highlights our superhero’s iconic costume, as well as the now-damaged getaway car. Within the image’s inner rim, two of the villains cower in fear at this impressive show of strength, while one of the car’s tires lies embedded in the rim. Another villain overlaps the outer rim in the foreground, adding dimension to the image. 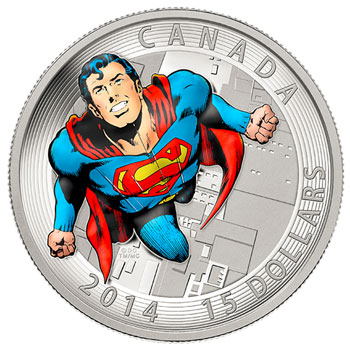 15 Dollars: Features the popular cover of Action Comics #419. An illustrated Superman is depicted in the classic iteration of his costume with the famous yellow and red S-shield. With fists clenched and a determined grin, the superhero takes to the skies high above the bustling city below, while his cape flutters behind him. By gently overlapping the inner rim of the image’s field, Superman appears to emerge from the coin itself. 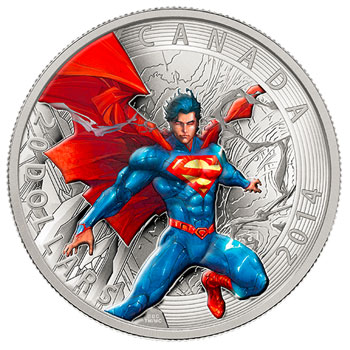 20 Dollars: Taken from Superman Annual #1, the coin’s reverse image depicts the Superman of the New 52 universe as though he is stepping out of the image’s field. As flashes of light crackle around him, his fixed, heated glare conveys strength and power. His blue and red Kryptonian battle armor is on full display; his familiar red cape crisply extends behind him as he moves away from the glinting Fortress of Solitude seen along the left edge. A series of concentric circles frame the image, further contributing to the design’s dynamic movement by creating an optical effect of motion. 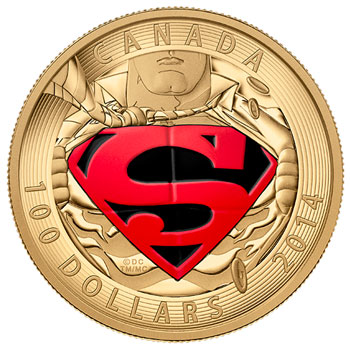 100 Dollars: The reverse image is taken from the cover of The Adventures of Superman #596 features perhaps one of the most iconic and enduring images associated with Superman: that of the famous S-shield. A partially obstructed view of Clark Kent allows the focus to remain on his chest as he rips back his shirt to reveal the emblematic S-shield. Color is used to add depth to the image. The overlapping of Clark Kent’s tie and buttons past the inner image, which is created by a series of concentric circles, further adds to the design’s dynamic movement and helps create the illusion that the emblem is emerging from the coin.

Each coin includes the obverse portrait of HM Queen Elizabeth II as designed by Susanna Blunt and used on all Canadian circulation and many commemorative coins since 2003.

The coins will also be available as of September 2nd 2014, at the Royal Canadian Mint’s boutiques in Ottawa, Winnipeg and Vancouver, as well as through the Mint’s global network of dealers and distributors, including participating Canada Post outlets. International orders dispatched.