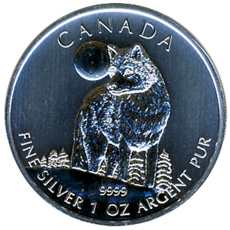 Earlier this month Australia’s Perth Mint had reported a significant backlog in its ability to produce as much fabricated silver products as customers wanted to purchase.  Now the Royal Canadian Mint (RCM) admits that it is having difficulty locating sufficient supplies of physical silver and expects the problem to get worse in the near future.

In a February 24 interview posted at http://kingworldnews.com, Dave Madge, who is director of sales for the RCM, acknowledged the problem.  He stated, “Demand right now for silver is through the roof and it shows no signs of slowing at this point.  Sourcing silver is becoming very difficult.  We are competing with a great many players when it comes to purchasing silver and many of these players are bidding the price higher.”

He also went on to say, “We are anticipating it to become even more difficult to secure supplies in the future.  This is based on what we are seeing firsthand and what our suppliers are telling us.  We work closely with these banks to secure silver and they tell us there is a lot of competition.”

When asked about the impact of tight silver supplies on prices, Madge responded, “I think you are going to see the premiums go up in order to secure silver.  At some point some players will be priced out of the market.  I don’t think this is a short-term situation, I think there are a lot of issues going forward and this may be the new norm.”

Madge’s statements confirm information coming from other parts of the physical silver market.  There is now pretty much a two-tier price structure in place, where paper silver is traded on the basis of the spot price of silver and those wanting to purchase physical silver are having it priced at 5-10 cents per ounce higher than current spot.

Shortly after the COMEX close on February 24, the price of silver was clobbered by almost a dollar.  There is an obvious explanation for the timing.  The March COMEX silver options expired that day, where call options with a contract price below the COMEX close (called “in the money”) could be settled for cash or, at the discretion of the contract owner, be fully paid to get almost immediate delivery of the physical silver.  By conveniently occurring right after the COMEX close, the price drop temporarily had the effect of reducing the size of the physical supply squeeze.  By early US trading on February 25, silver’s price had recovered most of the way to the February 24 COMEX close.

The events of the past 24-36 hours further demonstrate the volatility of the silver market.  If investors are uncomfortable in such an environment, they probably should not acquire a silver position.  However, if investors are better educated about what factors are affecting supply and demand for physical silver, they will be ready to sit tight or even buy more silver during these temporary sudden price drops.  The silver market in 2011 has been interesting thus far.  It will be even more exciting in the coming months.