The Royal Canadian Mint have announced the issue of a new four coin fractional silver set which features an image of the amazing bald eagle—Haliaeetus leucocephalus. Canada’s largest bird of prey and the only eagle exclusive to North America, an apex predator with no natural enemies, the bald eagle has long been a potent symbol of vision, power, and stoicism. The adult boasts a wing span of more than 2 meters or over six feet, a standing height of about 1 meter or about three feet, and an average weight of up to 7 kilograms or 14 to 15 pounds with females generally larger than their male counterpart.

The renowned raptor is noted for its distinctive dark-feathered body and white-feathered head, large golden eyes, bright yellow beak, and massive yellow claws armed with sharp, powerful talons. This long-lived bird can survive nearly 30 years in the wild and even longer in captivity. Nesting in tall trees near large bodies of water and well away from human habitation, bald eagles survive on a diet of fish, birds, invertebrates, and small mammals, but are opportunistic feeders who will also steal from other predators and eat carrion. 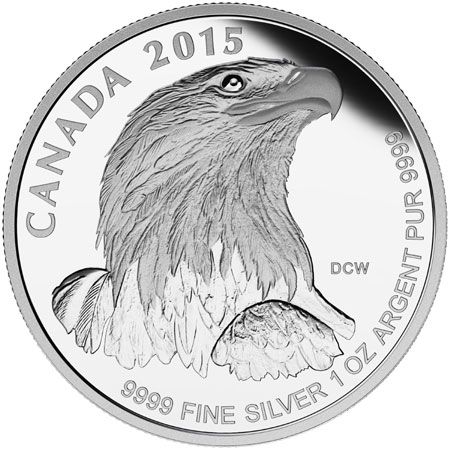 The reverse image was designed by award-winning artist Derek C. Wicks, who was twice named the National Artist of the Year by Ducks Unlimited. The design includes a simple head-shot of an adult bald eagle with its attention being attracted towards the right. The coins include a one ounce, half ounce, quarter ounce and tenth ounce. The obverse side includes the effigy of HM Queen Elizabeth II as designed by Susanna Blunt and used on all Canadian circulation coinage and many commemoratives since 2003. 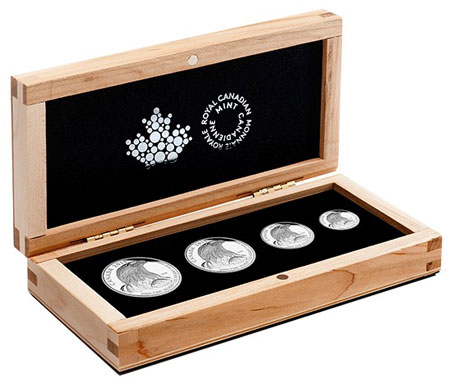 The four coin set is encapsulated and presented in a Royal Canadian Mint-branded maple wood case with a graphic outer presentation box. From the Royal Canadian Mint’s renowned collection of coins featuring the wild animals of Canada.