The Royal Mint have launched (4th September) a new silver coin which includes one of the country’s most revered reverse designs – that of Benedetto Pistrucci’s immortal portrayal of St. George slaying the dragon. The new coin is also the Royal Mint’s first “£20 for £20” offerings and, the UK’s first ever £20 denomination for a coin of any metal. Following hot on the footsteps of the recent £5 silver crown featuring the very same design issued to mark the birth of the first child of the Duke & Duchess of Cambridge, the coin sold out in just five days, the Royal Mint have now utilized this design for a new silver coin – also meant as a fitting memento to the Royal family’s addition this year. 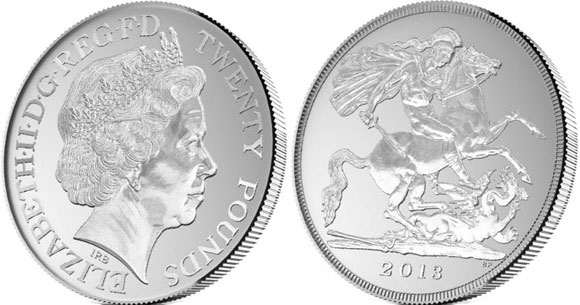 The Pistrucci-designed coin will be the first in a series of £20 denomination coins which will be issued periodically by The Royal Mint to celebrate significant events and figures from British culture in the coming years. The obverse of the coin includes the coin’s denomination in text and also the well-known depiction of HM Queen Elizabeth II as designed by Ian Rank-Broadley and in use on British commemorative and circulation coinage since 1998.

The coins will be strictly limited to three per household and are available to purchase only by UK residents exclusively from the Royal Mint website.  While the coins are legal tender, they will not be in general circulation for everyday use and the Royal Mint stipulates that they are designed as collector items only.  It’s anticipated that there will be high demand for the coins due to both the unique denomination and also the popular design.