The Royal Australian Mint have launched (2nd October) a new commemorative coin which pays tribute to  V8 Supercars and the classic twists of Mount Panorama that transform into a high powered battlefield on the first weekend in October.

The Bathusrt 1000, so named for its 1,000-kilometre (620 mi) touring car race which is held annually at the Mount Panorama Circuit in Bathurst, New South Wales.  The race was traditionally run on the first Sunday in October but in recent years has been held on the second. It is known among fans and broadcasters as “The Great Race”, and is widely regarded as the pinnacle of Australian motorsport. Since 1999, the race has been run exclusively for V8 Supercars. The race winners receive the Peter Brock Trophy which was introduced at the 2006 race in honor of the late nine-time Bathurst winner Peter Brock, the most successful driver in the history of the race. 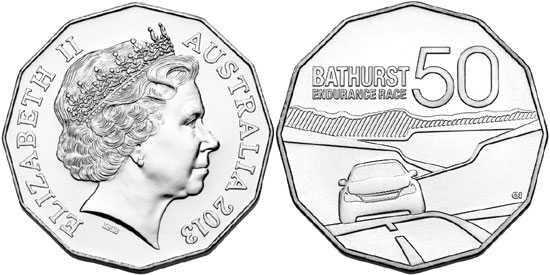 On the occasion of the 50th year anniversary of this exciting motorsport event, The Royal Australian Mint and V8 Supercars have partnered together to bring this supercharged design to life. Depicted on the reverse is a rendition of the both the raceway and touring car along with the text “BATHURST ENDURANCE RACE” and the coin’s denomination of “50” for fifty cents. On the obverse, is the current circulation portrait of HM Queen Elizabeth II as sculpted by Ian Rank-Broadley and in use on Australian coinage since 1998.

The coin is offered in a special FDC strike produced in cupro-nickel and packaged in a specially designed folder. Those interested collectors wishing to purchase the coin can do so by visiting the website of the Royal Australian Mint at: http://mintissue.ramint.gov.au/mintissue/product.asp?code=310133 International orders fulfilled.