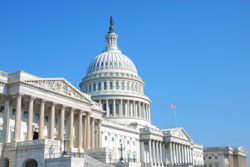 Legislation has been introduced which seeks to redesign the $50 Bill with the likeness of President Ronald Reagan. This is one of numerous attempts to pass legislation which would result in Reagan’s portrayal on coins or currency.

The bill H.R. 4705: President Ronald Reagan $50 Bill Act was introduced by North Carolina Congressman Patrick McHenry. The text of the bill simply specifies that section 16 of the Federal Reserve Act be amended by adding the following sentence: “The face of $50 Federal reserve notes printed after December 31, 2010, shall bear the likeness of President Ronald Wilson Reagan.”

Similar legislation had been introduced back in 2005 by Rep. John Kline of Minnesota. Patrick McHenry was a cosponsor of this bill. After introduction, the bill was referred to the Subcommittee on Domestic and International Monetary Policy, Trade, and Technology, and never progressed further.

The attempts to feature Ronald Reagan on coins have included a proposal to feature his likeness on the dime. The Ronald Reagan Dime Act was introduced in 2003, and would have displaced the image of Franklin D. Roosevelt.