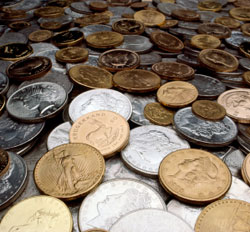 Rep. Paul Broun Jr. of Georgia has introduced the “Free Competition in Currency Act of 2013” in the 113th Congress. This bill contains the same provisions as bills previously introduced by former Congressman Ron Paul, which seek to repeal legal tender laws and prohibit taxation on certain coins and bullion.

The newly introduced bill H.R. 77 seeks to repeal Section 5103 or title 31, which states “United States coins and currency (including Federal reserve notes and circulating notes of Federal reserve banks and national banks) are legal tender for all debts, public charges, taxes, and dues. Foreign gold or silver coins are not legal tender for debts.” This would be replaced by “5103. [Repealed].”

The bill also provides that no tax may be imposed with the respect to the sale, exchange, or other disposition of any coin, medal, token, or gold, silver, platinum, palladium, or rhodium bullion, whether issued by a State, the United States, a foreign government, or any other person. Further, no state may asses any tax or fee any any currency or monetary instrument used in the transaction of interstate or foreign commerce which is subject to the enjoyment of legal tender status under article I, section 10 of the United States Constitution.

Finally, the bill would repeal superfluous related sections of the United States Code by striking Title 18, sections 486 and 489, which relate to uttering coins of gold, silver, or other metal and possessing likenesses of coins. These are treated as anti-counterfeiting statutes. It is provided that any prosecution under these sections shall abate, and any previous conviction under the sections shall be null and void.

After its introduction on January 3, 2013, H.R. 77 was referred to the Committee on Financial Services, in addition to the Committees on Ways and Means, and the Judiciary. The bill currently has no co-sponsors.

When introduced by Ron Paul in the 112th Congress, the Free Competition in Currency Act of 2011 garnered one co-sponsor and had hearings held by the Subcommittee on Domestic Monetary Policy and Technology. The bill was not voted on by the House.

Rep. Paul Broun Jr. has also reintroduced Ron Pauls’ legislation calling for an audit of the Federal Reserve. The bill H.R. 24 currently has five co-sponsors and has been referred to the Committee on Oversight and Government Reform, and in addition to the Committee on Financial Services.

Ron Paul’s “Audit the Fed” bill had passed the House in the last session of Congress 327-98 with 274 cosponsors. The Senate failed to act on the bill before the end of the 112th Congress.

In a statement included in a press release, Rep. Broun indicated his desire “to pick up right where Congressman Paul left off.”