The National Bank of Romania has issued (30th April) new collector’s gold coins which are dedicated to the memory of Romanian national hero Michael the Brave (1558-1601). He is remembered in the country’s history as having united Romanian-speaking peoples and historic territories before his own demise at the hands of an assassin in August 1601.

Born under the family name of Pătraşcu in what was thought to be the year 1558, very little is known about his childhood and early years as an adult. He was believed to have been, by most historians, the illegitimate son of Wallachian Prince Pătraşcu cel Bun (Pătrașcu the Good), of the Drăculeşti branch of the House of Basarab, who reigned from 1554 to 1557. Other opinions summarise that Michael had invented his descent in order to justify that his rule through his mother was without dispute. Theodora Kantakouzene, who was a member of the Kantakouzenoi lineage, a noble family present in Wallachia and Moldavia, allegedly descended from the Byzantine Emperor John VI Kantakouzenos.

Through a series of battles and alliances, Michael the Brave is considered one of Romania’s greatest national heroes and remembered as the first architect of Romanian unity. He was appointed a Ban (or governor) of the province of Mehedinţi in 1588 and then a stolnic (or noble rank) at the court by Mihnea Turcitul (1564–1601), Prince of Wallachia in 1577 and 1583, and from 1585 to 1591. Michael’s rule over Wallachia began in the autumn of 1593 and within two years a war with the Ottomans had begun. A conflict in which the prince fought was at the Battle of Călugăreni and is considered one of the most important battles of his reign. Despite Wallachia emerging victorious from the battle, Michael was forced to retreat with his troops and wait for aid from his allies, most notably Prince Sigismund Báthory (1573-1613) of Transylvania and the Holy Roman Emperor Rudolf II (1576-1612). The war continued until peace finally emerged in January 1597, but this cessation of hostilities would last for only 18 months. A more lasting peace was again reached in late 1599, but only due to the fact that Michael was unable to continue the war due to lack of support from his allies. However, in 1599, Michael won the Battle of Șelimbăr, which enabled him to enter the city of Alba Iulia in Transylvania, thus becoming the imperial governor, or more effectively, the de facto ruler of Transylvania.

With this momentum of success influencing his policies, and just months after his conquering of Transylvania, Michael’s troops invaded Moldavia and reached its capital Iaşi — forcing the Moldavian leader Ieremia Movilă (reigned 1595-1606) to flee to Poland for safety. Michael was declared prince of Moldavia shortly after Movila’s departure and managed to keep control of all three provinces for less than a year before the nobles of Transylvania, and certain boyars in Moldavia and Wallachia, plotted to overthrow Michael and turn against him in a series of revolts.

It was at this crucial time that Michael decided to ally himself with the Holy Roman Imperial General Giorgio Basta (1540-1607), originally an Italian general of Albanian origin, and defeated an uprising of the Hungarian nobility in Transylvania. It was due to this particular victory that Emperor Rudolf immediately ordered Michael’s assassination, fearing reprisals from the more influential Hungarian nobles within the empire. Prince Michael the Great was assassinated on the 9th August 1601, by Basta’s own men, and it was believed at the time that Basta had sought control of Transylvania for himself.

Michael’s memory continues to be venerated within Romania, and as a tribute, the Order of Michael the Brave, which is Romania’s highest military decoration, was named after Michael the Great (Mihai Viteazul). The previous 100-lei circulation coin, which included the effigy of Mihai Viteazul, was in circulation from 1991 until 2005. 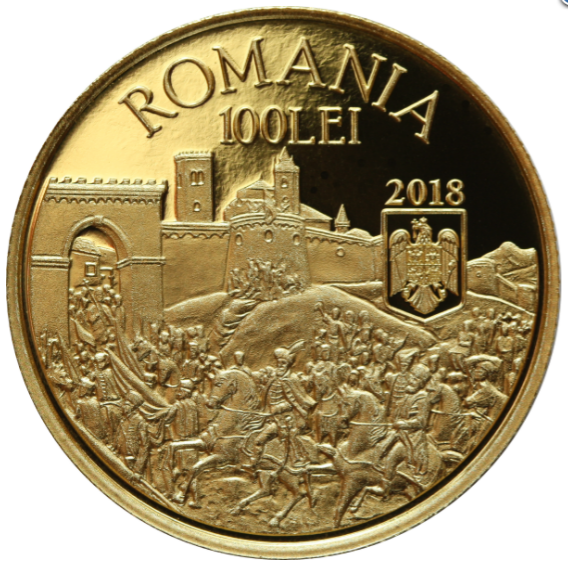 The coin is produced by the Monetăria Statului, at their facilities in Bucharest, on behalf of the National Bank of Romania. The reverse includes an image of Michael the Brave as he was depicted riding into Alba Iulia. The inscription ROMANIA is placed in an arc overhead and the face value of 100 LEI is seen just below this text. The coat of arms of Romania and the year of issue, 2018, are placed to the right of the primary design. 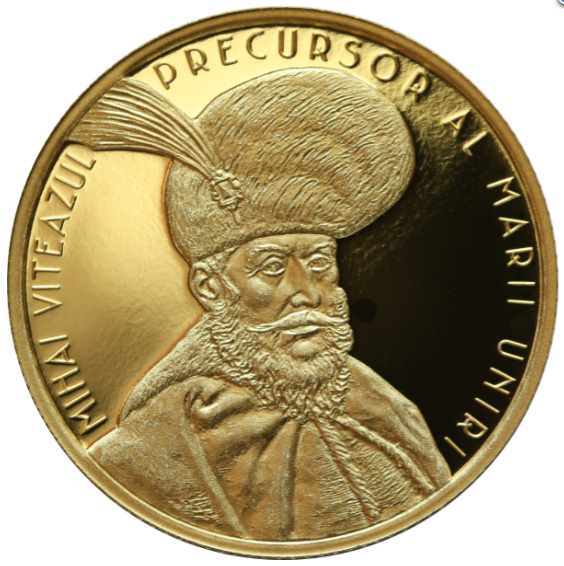 The obverse includes the portrait of Michael the Brave, which is inspired by the original work by the painter Aegidius Sadeler. It is believed to have been painted when Prince Michael was 43 years of age. The coin includes the inscriptions MIHAI VITEAZUL and PRECURSOR AL MARII UNIRI (“Michael the Brave, forerunner of the Great Union.”)

The gold coins are individually housed in transparent plastic capsules and are accompanied by leaflets featuring a presentation of the numismatic issue in Romanian, English, and French. Each leaflet comes with a certificate of authenticity bearing the signatures of the governor and the chief cashier of the National Bank of Romania. The coin is available directly through the Bucharest, Cluj, Iasi, and Timişoara regional branches of the National Bank of Romania.