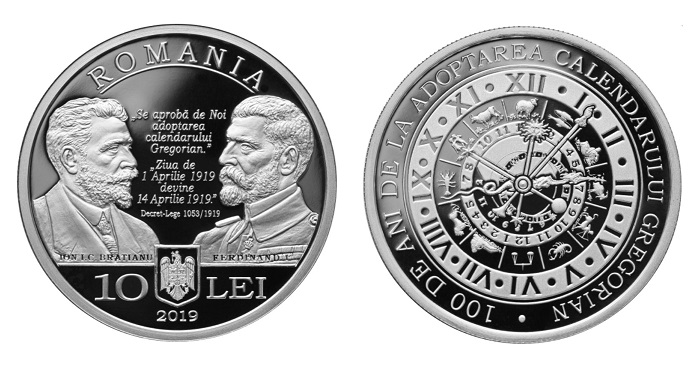 The Banca National a’ Romaniei has issued (1st April) new collector coins which mark the centenary anniversary of the-then Kingdom of Romania officially adopting the use of the Gregorian Calendar. On the 1st April 1919, Romania, as was the case with other countries with a majority Christian Orthodox population, adhered to the Julian calendar. Before this anniversary, the countries in Western and Eastern Europe managed with an 11-day difference in the days. The calendar derives from the Roman Emperor Julius Caesar, who changed the course of the history of the Greco-Roman world decisively and irreversibly as his name has survived due to his reform of the calendar. The old Roman calendar was known to be inaccurate and was manipulated for political purposes. It is Caesar’s revised calendar, known as the Julian calendar, which is still partially in force in the Eastern Orthodox Christian countries to establish the dates of movable feasts such as Easter. The Gregorian calendar, now in use in much of the West, is a slightly corrected version of the Julian calendar and was introduced by Pope Gregory XIII (1502–1585).

Advised chiefly by the Neapolitan astronomer and physician Luigi Lilio Ghiraldi (d. 1576) and the German Jesuit and mathematician Christopher Clavius, Gregory corrected what were believed to be the errors of the Julian calendar, in use since the year 46 A.D. The new Gregorian calendar was officially introduced on the 24th February 1582, which advanced the date by 10 days. The public was given ample opportunity to prepare for the change as it was decreed that the 4th October would merely be followed by the 15th October that year. The new method of keeping track of the days also relied on a new practise, or calculation, of defining leap years. Despite the reform being welcomed by astronomers of the day such as Johannes Kepler of Germany and Tycho Brahe of Denmark, as well as by the Catholic princes of Europe, many Protestants believed it to be sacrilegious and refused to adopt it. The Gregorian calendar was accepted by the countries of Europe in time, with Romania adopting the calendar in 1919 and the last state in Europe, Greece, embracing it in 1922. 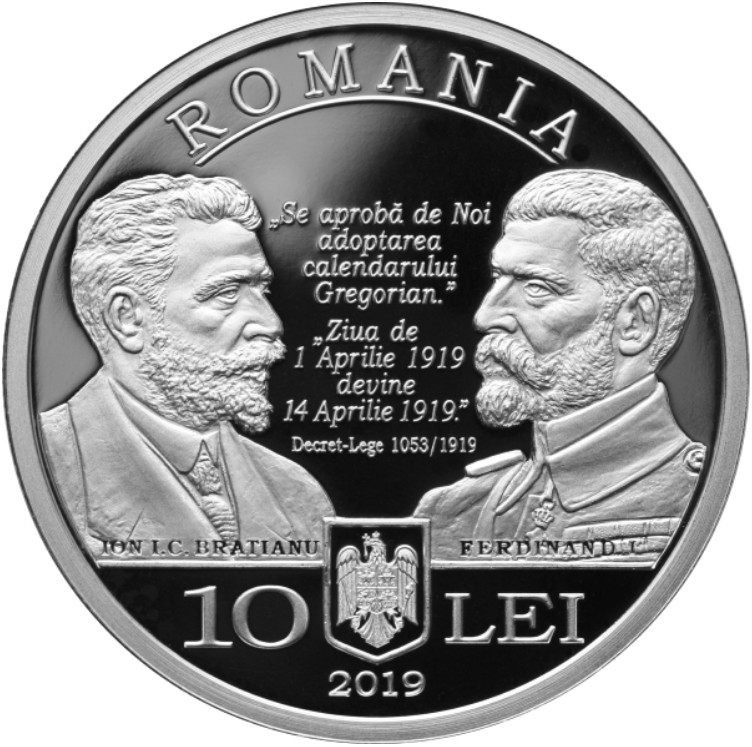 The Monetăria Statului produces the coins at their facilities in Bucharest on behalf of the National Bank. The obverse side of the coins includes the portraits and names of Prime Minister Ion I. C. Brătianu (on the left, facing right) and King Ferdinand (on the right, facing left). Two quotations from the law, Se aprobă de Noi adoptarea calendarului Gregorian (“We approve of the adoption of the Gregorian calendar”) and Ziua de 1 Aprilie 1919 devine 14 Aprilie 1919 (“Day 1 April 1919 becomes April 14, 1919”), are positioned in the middle of the two portraits. The denomination of 10 LEI is placed below the portraits and inscription. The reverse side depicts a representation of an astronomical clock and the inscription 100 DE ANI DE LA ADOPTAREA CALENDARULUI GREGORIAN (“100 years from adopting the Gregorian calendar”) placed above the primary design along the rim.