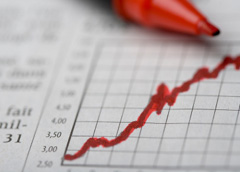 Short-term interest rates have not moved such a large percentage as their value is not subject to as much risk of higher inflation of the money supply between now and their maturity date.

The timing of this increase is not coincidental or occurring in a vacuum.  It is matching up almost perfectly to when President Obama, Federal Reserve Chair Bernanke, Treasury Secretary Geithner, and other top officials started making comments that consumer prices were not rising fast enough (and that the government should do something about this “problem”).

As soon as it became evident that the US government was going to commit to a major inflation of the US money supply right after the elections, investors didn’t wait.  They quickly started demanding a higher interest rate to compensate for the risk of loss as the value of the US dollar continued to decline.

What should be scaring the public, if they only realized it, is that the 10-Year Treasury debt interest rate has increased 22% in less than six weeks while the Federal government has spent tens of billions of dollars buying all maturities of Treasuries trying to hold down the interest rate.

How high would the rate have increased if the government wasn’t so busy manipulating this market?  I don’t know.

The 10-Year Treasury interest rate was all the way up to 3.834% at the end of 2009.  In that context, even the 2.95% rate on November 15 might seem low.  However, you have to realize that the drop in the interest rate earlier this year was significantly influenced by a previous round of “quantitative easing.”  The other major influence was the European financial crisis, which led a lot of investors to flee European debt to the relative “safety” of US Treasuries for a time.  Back then, most people probably thought or at least hoped that it would be the only time the US government would deliberately inflate the US money supply to this degree.

This time around, it’s different.  What you need to realize, whether or not the mainstream media ever tell you, is that this sharp increase in the 10-Year Treasury debt interest rate is signaling an expectation by sophisticated investors for a continuing decline in the value of the US dollar—guaranteed by the US government.  As the dollar falls, that will invariably lead to higher gold and silver prices.

Don’t let the temporary decline in gold and silver prices over the past few days deceive you into thinking that these markets have peaked.  Every bull market has temporary episodes of profit taking and retrenchment.  Look at today’s prices as another short-term buying opportunity.  Listen to the alarms of the rising 10-Year Treasury interest rate and protect yourself.