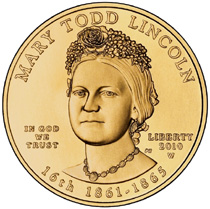 Following the recent rise in the price of gold, the United States Mint has increased prices for certain numismatic products including gold coins. The prices for available First Spouse Gold Coins and the 2010 Gold Buffalo Proof Coin were increased, although the price of the 2011 U.S. Army $5 Gold Commemorative Coin remained unchanged.

Effective from January 12, 2009, the United States Mint adopted a policy which allows the prices for most numismatic products containing gold and platinum to be adjusted as frequently as weekly based on the market prices of the metals. The policy specifically does not cover commemorative coins, which are still priced based on publication within the Federal Register.

During the weekly period from Thursday, February 10, 2011 to Wednesday, February 16, 2011, the average London AM Fix price of gold was within the $1,350 to $1,399.99 range. Since products were priced within a lower range, the prices were adjusted proportionally yesterday.

The price of the 2010 First Spouse Gold Coins were raised from $816 to $841 for the uncirculated versions and from $829 to $854 for the proof versions. Each coin contains one-half ounce of 24 karat gold. All of the 2010 releases remain available except for the James Buchanan’s Liberty proof coin, which sold out on February 8, 2011.