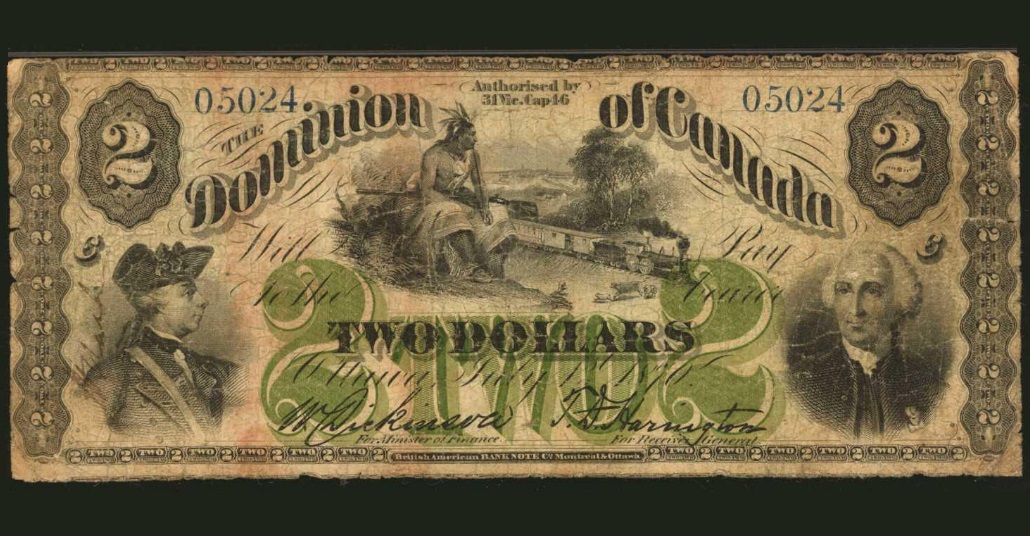 Santa Ana, CA — Stack’s Bowers Galleries is pleased to present details of their auction of world coins, world paper money, and ancient coins to be held in conjunction with the prestigious New York International Numismatic Convention (NYINC). This event will be held January 10-12, 2019, at the Grand Hyatt Hotel in New York City.

Among Brazilian banknotes is found an extraordinary number of high-grade Proofs, as well as pieces that the firm has never before offered at auction. While the Stack’s Bowers Galleries Hong Kong Showcase Auctions are a more typical venue for Asian material, the 2019 NYINC sale offers an exceptional quantity of rare and high-grade Asian banknotes that are likely missing from even the most advanced collections. Highlighting this group is a 1916 Straits Settlements 100-dollar note immediately followed by the 1925 date (lots 30354 and 30355).

Session B offers world coins of countries ranging from Afghanistan to Great Britain. The first major highlights are from Austria, beginning with lot 40015, a Salzburg five-ducat issue of Archbishop Leonhard. This is an exceptional piece, thought to be unique. Two lots later (lot 40017), a 16th-century four-ducat with superb style showcases impressive Renaissance coin portraiture. An exquisite Near-Gem Brazilian 1727-M 20,000-reis struck under Joao V (lot 40043) is tied with one other example for finest certified. Among coins of China, a pair of impressive 10-tael gold ingots (lots 40075 and 40076) are identical to pieces recovered from the Geldermalsen. 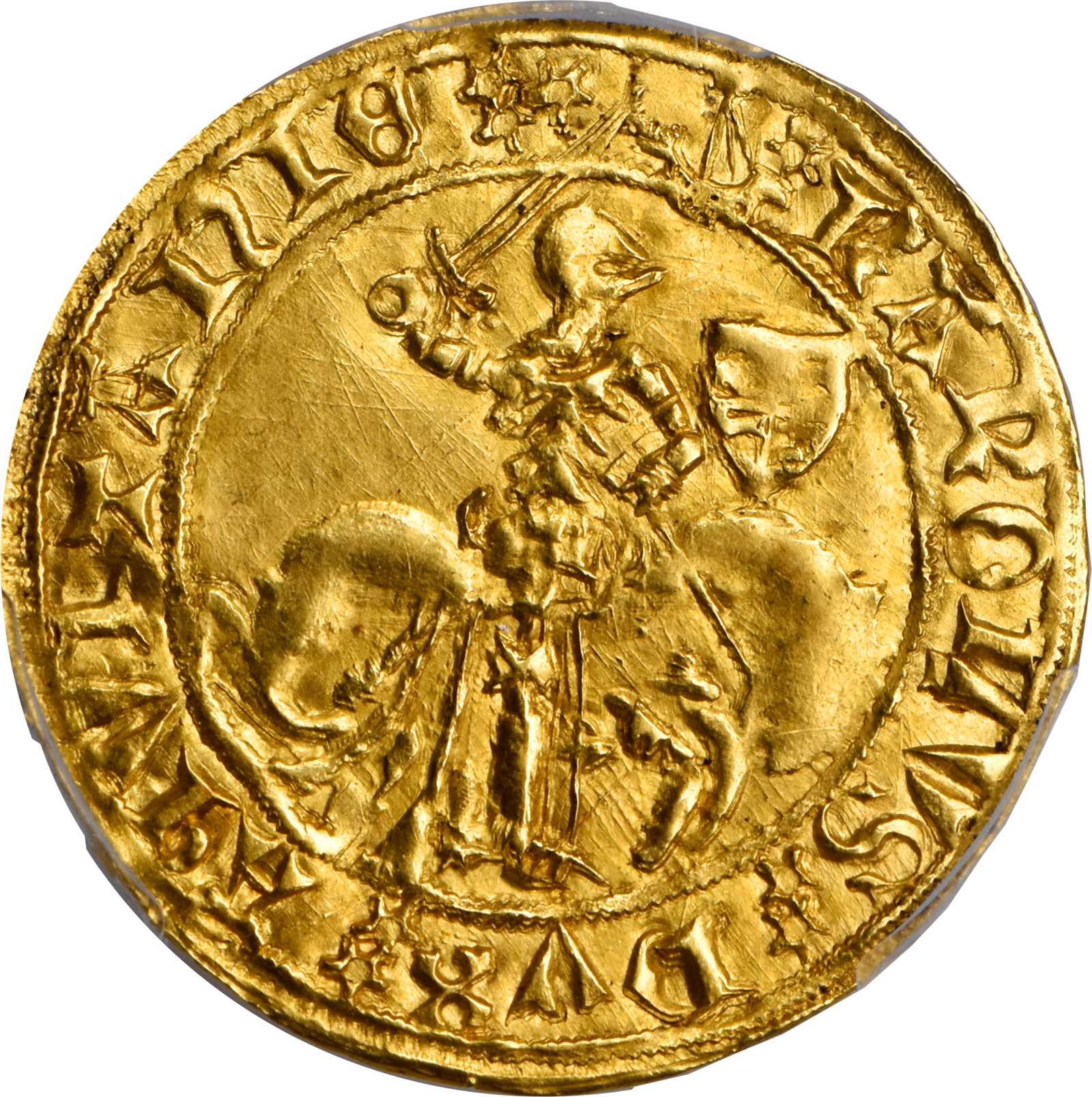 A robust French coinage section features over 60 lots with pieces for nearly all collector types: Medieval, hammered, milled, Napoleonic, Essais, medals, and 20th-century coinage. The Duchy of Aquitaine offers two highlight gold pieces in lots 40154 and 40155. The first is a wonderful and excessively rare Cavalier d’Or of Duke Charles, son of King Charles VII of France. Immediately following the Cavalier d’Or is a Hardi d’Or, also issued by Duke Charles. Lot 40205, a highlight from four centuries later, offers a lovely five-franc with a mintage of just 40 pieces, issued in 1889 to commemorate the 100th anniversary of the French Revolution.

Germany also offers just over 60 lots with more than a dozen marquee lots. One of the first portrait coins of Bavaria is found in lot 40220, an extremely rare ducat of Albrecht V. A five-ducat commemorating Matthias as Holy Roman Emperor and one of only two known (lot 40234), displays an incredible likeness of the armored monarch charging on a warhorse with a city view in the background. Lot 40237 presents an exceedingly rare Helfenstein gold gulden with the coat of arms featuring elephants (see the detailed lot description for further analysis). This is the only example known in private hands. 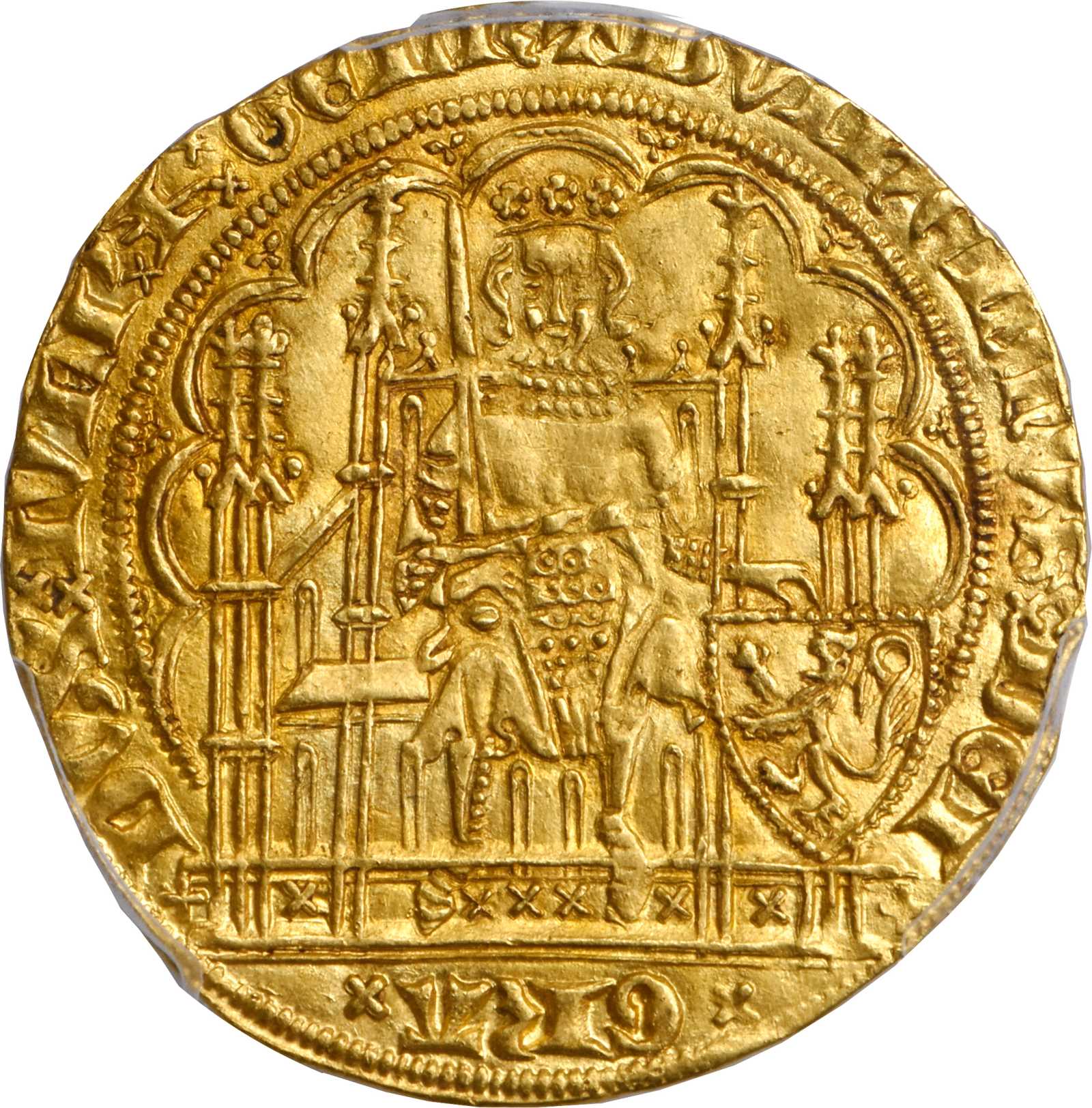 At first glance, lot 40242 appears out of place in the German section, as it more closely resembles a contemporary French Chaise d’Or. This Ecu d’Or of Wilhelm III is a legendary gold rarity and potentially one of only two examples in private hands. A marvelous Nurnberg city-view eight-ducat in lot 40245 was once owned by Nurnberg specialist Herbert J. Erlanger. An extremely rare Mannheim Mint ducat (a one year type struck in 1769) in fantastic condition is found in lot 40247. 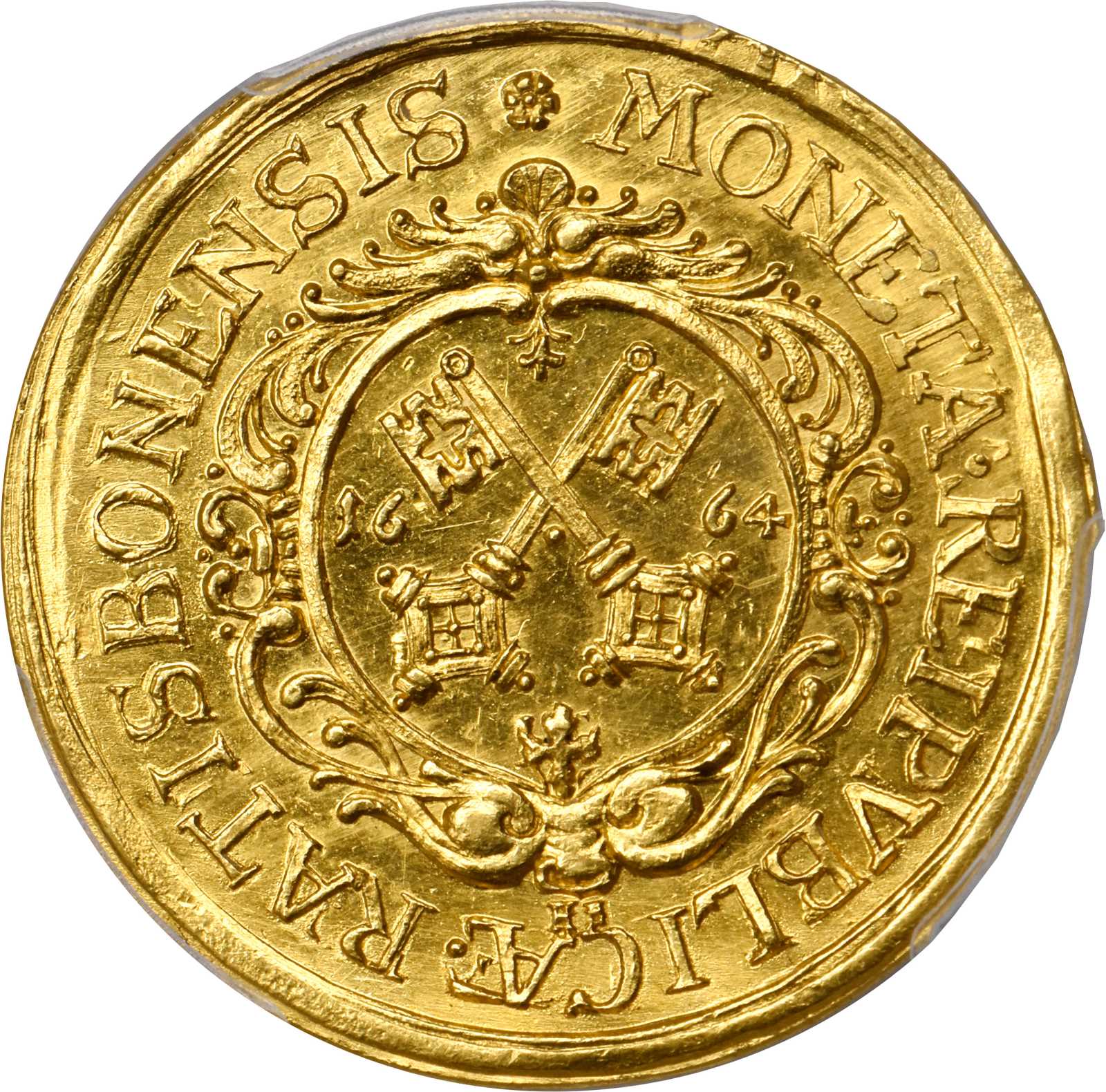 Regensburg provides lot 40251, a four-ducat in Mint State preservation, while lot 40267 features a unique three-ducat of Silesia-Munsterberg-Oels commemorating the 10th anniversary of the death of Karl I. Yet another magnificent city-view gold issue, this one from Wurzburg, appears as lot 40275, a two-ducat displaying a regal crowned lion hoisting aloft a sword and scales. 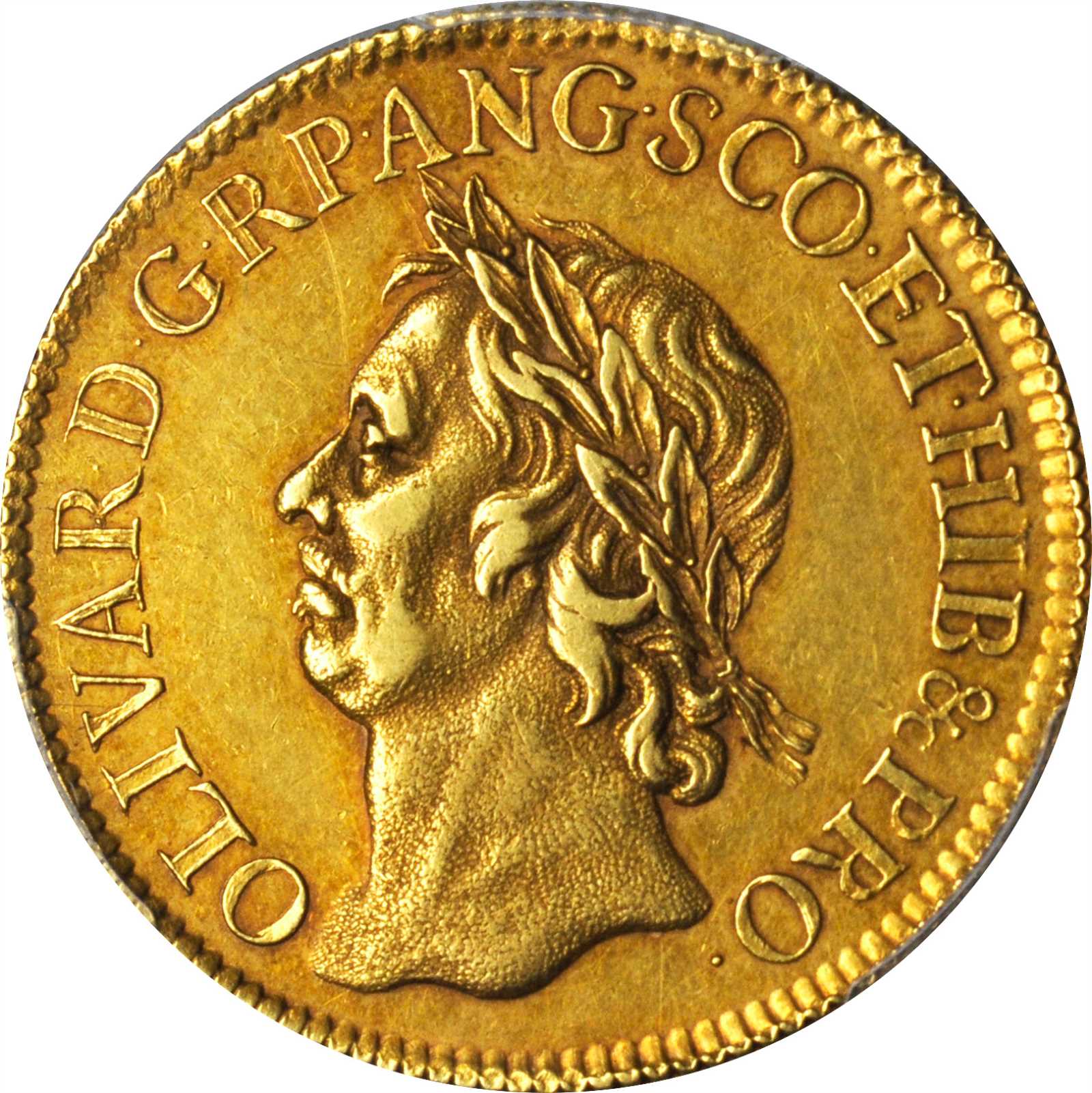 Session B is capped by a substantial offering of British coinage, including coins and medals spanning 12 centuries. Lot 40293 is a beautiful Mint State ryal of Edward IV, while lot 40315 is a wonderful broad of the Lord Protector Oliver Cromwell. The following lot (40316) presents a charming five-guinea of William and Mary. Two impressive and desirable Queen Victoria Golden Jubilee Proof sets are offered and are sure to draw considerable attention. Lot 40361 is the standard 11-piece set with an additional 1887 Maundy Set and lot 40362 is the 11-piece set once owned by John Jay Pittman. Lot 40369 offers a four-piece gold Proof set of George V commemorating his coronation.