The 1936 Providence, Rhode Island Tercentenary Commemorative Half Dollar (generally known as just the “Rhode Island” commemorative) is one of the more available commemoratives from the 1930s. It was struck at all three mints in use at the time, and many of the 50,000 coins struck appear to have been saved by collectors and other people interested in the issue at the time. It was claimed that the issue had sold out quickly, but later evidence suggests that the distributors held many coins back, which were offered at significantly higher prices shortly thereafter to interested people.

The issue commemorated the 300th anniversary of the founding of Providence, Rhode Island, now the capital of the state and its biggest city. Interestingly, the coin struck to commemorate the city’s founding interestingly does not include the name of the city itself. Maybe this is the reason that the issue is considered to be one of the least popular designs of all classic commemoratives, but more likely it is the actual design, which was the work of Rhode Island School of Design instructor John H. Benson and his friend Arthur G. Carey. 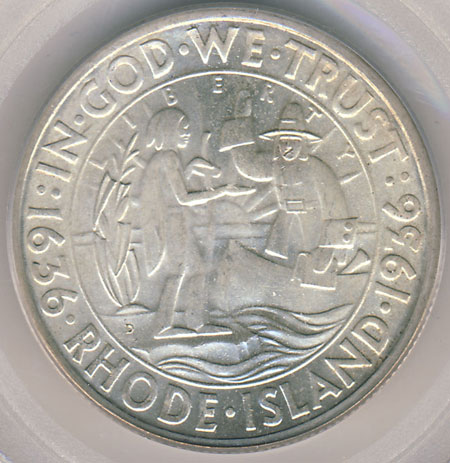 The obverse features a design within an inner circle that displays Roger Williams in a canoe, welcomed by a Native American at State Rock. Williams’ right hand is raised, and in his left hand is a bible. In the background is a stalk of maize and the sun with extended rays, with signifies religious freedom. Around the design is :IN·GOD·WE·TRUST: and 1636·RHODE·ISLAND·1936. Coins minted at Philadelphia do not carry a mintmark. The D or S mint mark is found under the stalk of maize signifying whether a coin was struck at Denver or San Francisco respectively.

Roger Williams was the founder of the city of Providence, Rhode Island. He was born in London around 1603 as the son of a merchant. At a young age he acquired an interest in theology, and became a Puritan at Cambridge. Later, in his twenties, he considered the leading Church of England corrupt and too much involved in government, an opinion that would become very important for the rest of his life. A year after getting married he decided that it was time to leave England and move to America. He became a separatist and he arrived in America in early February 1631. His first few months and even years were spent learning the customs, language and traditions of the Native Americans of the area. In late 1631 he ended up in Plymouth, after authorities at Salem had initially invited him to preach but later withdrew their invitation when leaders in Boston protested. The Boston church had invited Williams themselves upon his arrival, but Williams had declined the offer on grounds that the local government was not separated from the Church of England.

While at Plymouth, Williams openly criticized both Plymouth and Massachusetts for taking land from the Indians without first buying it, and also openly criticized the King of England. In his professional career, Williams wanted to be fully separate from the Church of England, which was difficult even in America. He later moved to Salem, but authorities were not happy with him and his thoughts there, and exiled Williams after convicting him for sedition and heresy. In early 1636 he left Salem and moved north, with a few of his most devoted followers, also separatists.

Williams and twelve friends founded the city of Providence later that same year on land he had purchased from the Narragansetts. Among Williams’ core beliefs in founding the city was the separation of church and government, which was a first in America but would later find root in both the United States Constitution and the First Amendment. As a result the city soon attracted likeminded people as Williams from all over New England and beyond, and although growth was slow the city played an important role in the history of Rhode Island. Williams returned to 1643 to obtain a charter for the newly founded colony, and eventually Rhode Island would become one of the original thirteen states of the United States of America. 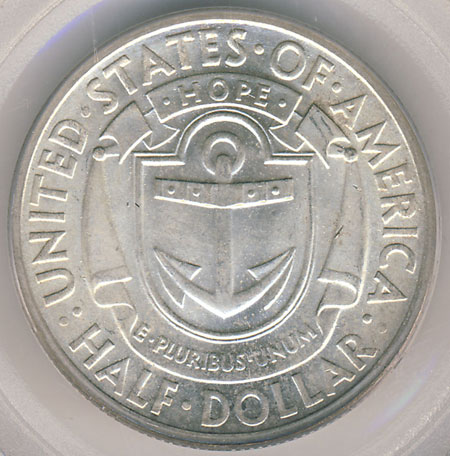 Back to the coin that was issued 300 years after Roger Williams first founded Providence. The reverse features a large anchor in the center, with the word “HOPE” above it and the motto E PLURIBUS UNUM below. This is similar to both the State Shield and Seal, which have the same design elements. Hope is also the official state motto of Rhode Island. Near the bottom is the denomination, HALF DOLLAR, and along the top is UNITED STATES OF AMERICA.

The Rhode Island Commemorative Half Dollar was authorized by the Act of May 2, 1935. A maximum of 50,000 coins were to be struck. It was not specified where the coins should be struck, and in the end the mintage was divided over the three mints in use at the time. The Philadelphia Mint produced 20,000 coins, while both the Denver and San Francisco Mints produced 15,000 coins each. All three Mints produced a small number of assay pieces as well that were later melted. The coins were issued by the Rhode Island and Providence Plantations Tercentenary and available at local banks and Grant’s Hobby Shop in Providence. The cost was $1 each locally and $1.50 for the coins sold through the mail.

It was said that when sales started in March of 1936 the issue sold out soon (many people received less coins than they ordered, presumably because of high demand and wishes of the distributor to have a wide distribution of the issue), but we know now that this should be taken with a grain of salt. People in the know had access to a large number of pieces available for just over the issue price, including Grant’s Hobby Shop. It seems that a number of people tried to hype the issue for their own personal gain.

Now, more than 75 years after the release of the Rhode Island Commemorative the design is easily found in all grades. In MS66 the coin becomes scarce, and MS67’s exist but are rare. None of the three issues are particularly rare, although certification numbers are lowest for the San Francisco issue. Price differences, however, are minimal if they even exist.