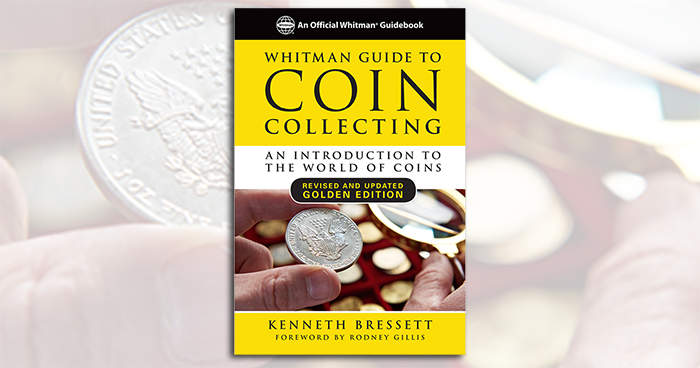 The revised and updated edition of Whitman Guide to Coin Collecting includes the basics from previous editions along with pertinent new information for both newcomers and experienced numismatists. In this review, we’ll cover in depth the content for new hobbyists, but we also want to address the numismatic experts early in this critique.

Too often coin dealers and numismatic writers, like me, overlook books that target newcomers to the hobby. What are we to learn, anyway, that we don’t already know? I’m writing this on September 25, 2017, and tonight I am slated to speak at the Ames, Iowa, Coin Club. Coincidentally, I just finished reading Kenneth Bressett’s Whitman Guide to Coin Collecting — a terrific bargain at $12.95 — and will use some of his basic information from the chapter on grading in my talk.

In other words, experienced collectors and numismatists can utilize this work to explain complex topics such as varieties and common coin errors in a language that beginning and intermediate collectors — as might be found in coin clubs — can understand.

If you give such presentations, buy this book. I can think of no better guide to introduce readers into the world of coins, and Bressett, the author of some 20-plus books, not only provides a wealth of facts in discussing basic collecting, replete with high-resolution photos on glossy paper (rare in book publishing), but also inserts history and numismatic tidbits throughout these chapters:

The back-of-the-book content is equally instructive, featuring a gallery of actual coin sizes and a glossary of coin terms.

The writing throughout the book is crisp and conversational with a loving tone that begins with Bressett’s dedication to his wife and “second great devotion,” i.e. collecting. That tone is perfect in introducing potentially complex topics, such as grading standards, because it inspires readers to keep learning via more specialized works.

In the interest of disclosure, I know that Whitman operates Coin Update and perhaps has a stake in a positive review, which I am posting now. I am often wary about updated books, and this one has been a best-seller for more than 20 years. But an alluring aspect of this new edition is a snappy design with pull quotes and lots of photos to illustrate the topic for more-visual readers. As experienced collectors know, numismatic photography is a key component of the hobby, and the photos here excel both in detail and cutline. This is primarily why I decided to delve into this book, looking for problems or missing information.

What I did find was a well-illustrated, designed, and fact-filled book.

Photos make a big difference. Here’s an example explaining the fun of collecting: “Have you ever wondered what Queen Cleopatra of Egypt really looked like?” Bressett writes. “Was she the ravaging beauty we see in movies or read about in novels? Did she actually exist? Those questions can all be answered by looking at one of the many coins she had made for use in her kingdom.”

And of course, Bressett — an authority on ancient coins — includes a photo of a Cleopatra coin, adding that she “appears to be far less beautiful than many believe.”

The history of coins occurs throughout. He describes the advent of serious collecting, which began in the 1830s and continued throughout the Civil War, when fractional currency was created to make up for the hoarding of metal coins. He covers the founding of the American Numismatic Society in 1857 and then continues with other organizations and how, when, and why they came into being. Coin booms are covered too, in the Depression era, the 1960s, and the mid-1980s. There are photos on almost every page, and this brings history to life.

Bressett advises beginners to collect only a few different types of coins when starting out, and to look for the best-quality coins that collectors can afford. Newcomers start with looking through pocket change and then advance to other buying venues, including Internet auctions.

The book also contains charts. On pages 34–36, all the mintmarks of U.S. coinage are covered along with where to find those marks on every denomination.

Often Bressett adds fun facts to numismatic knowledge. Many of us may know what he explains, but now can see those facts in a new light so that we might inform others in educational ways at coin clubs and numismatic presentations. An example of this is on a full-page portrait of Ben Franklin, where he writes that the statesman “would have preferred a wild turkey on U.S. coinage, rather than an eagle. In 2015, one was featured on the America the Beautiful quarter dollar for Louisiana’s Kisatchie National Forest.”

And of course, overlaid on the portrait is a Franklin half dollar and 2015 Kisatchie quarter dollar. Now when I tell the anecdote of having a turkey as the national bird, I’ll bring a coin to illustrate that, thanks to this book.

The judicious use of photos keeps readers turning pages. There is one depicting a female presenter at a coin club with a whiteboard stating “Women on Coins.”

Bressett also illustrates how to hold coins and store them so that they remain as pristine as possible. He gives instructions on securing and insuring coins, including taking out coverage for collections stored in bank boxes — something experienced collectors may not have realized or done.

He discusses third-party grading along with advice on how to grade according to numismatic standards. All of it is illustrated again with informative cutlines and provides a compendium of problems often found on coinage, including bag marks, scratches, edge bumps, die weakness, striking weakness, cleaning, and more.

As the hobbyist becomes more invested in collecting (literally and figuratively), Bressett makes a useful recommendation: “A good rule for investors to follow is to concentrate on purchasing coins in a price range of $300 to $10,000.” He notes exceptions, of course, but also states that coins “in this price bracket also stand a good chance of doubling in value in a shorter period of time than those priced much higher or lower.”

Updated advice in the chapter on “Coin Prices and Values” includes buying coins in auctions and on the Internet.

Bressett includes a useful catalog of U.S. coins that describes the denomination with a photo and lists coin-dealer values. Here is an excerpt from the Peace Dollar (1921–1935):

While I especially like the catalog — which also includes commemoratives, bullion, and special coins — I would have advised against adding values in Very Fine. Values change with the price of metal and hobby interest. Perhaps, in a future edition, Bressett would include key dates and semi-keys with mintages or other factual tidbits.

The book ends with a section on counterfeits and selling collections, taking on difficult topics with the same loving tone.

Have you read this book? If so, share your opinion. If not, what are your favorite coin books?

Bressett’s will be one of mine.