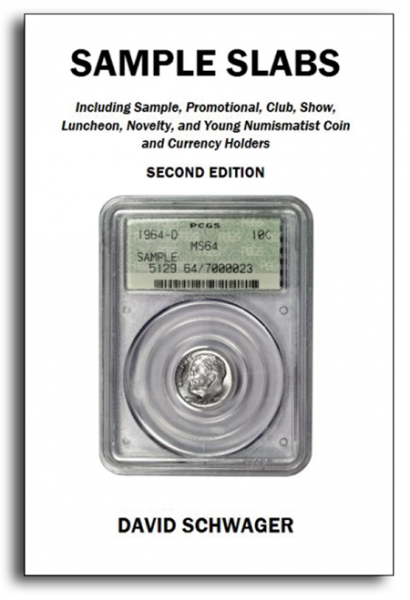 Numismatic writer David Schwager’s Sample Slabs catalog—a behemoth 620-page compendium of sample coin and currency holders from dozens of companies, including NGC and PCGS—is a fascinating study in “buying the holder, not the coin.” Well, maybe that’s an overstatement because the work is so well written, researched and illustrated that you may want one, as I did, for a personal numismatic library.

I have been interested in the design of holders ever since purchasing a silver dollar in a PCGS Regency holder. Earlier this month one such “sample” holder, believed to be the only one of its kind, sold on eBay for $3,449.99. Owned by numismatist Michael Kittle, who purchased the holder at the ANA World’s Fair of Money in Anaheim. 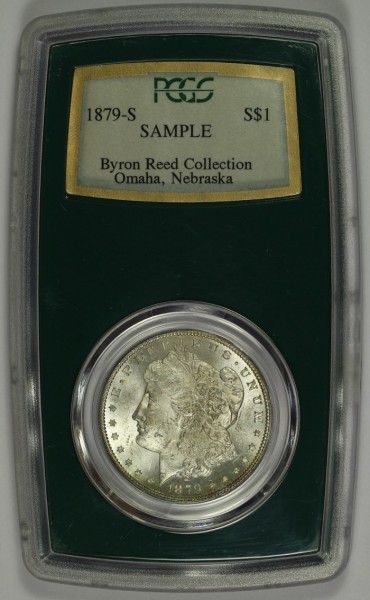 Kittle saw Schwager at the Anaheim show shortly after he bought the PCGS Regency sample slab. “I showed it to him to see if he had ever seen one before and he said he couldn’t even believe what he was looking at,” Kittle said.  “He told me if one had been known before, it would have been on the cover of his book.”

Schwager’s book not only catalogs slabs but also explains how to collect them. Each entry has a designation identifying the company, coin, and other attributes, along with a narrative and estimated value. “You and I will probably never discover a VAM silver dollar variety,” he writes, “but we will discover samples unlisted in any reference.”

That is precisely what Kittle did at the ANA show, and it paid off handsomely.

Schwager explains several ways to begin collecting sample slabs. Before we get to the explanation, you should keep in mind that the word “sample” is key here. NGC “Black Slabs” and PCGS Regency and Doily slabs sell for premiums with coins inside, too; in fact, an NGC Black Slab with a 1946-D Half Dollar sold on the same day as Kittle’s Regency holder for $3,740 (realized price) in a GreatCollections sale. What made Kittle’s holder special (and some might say, a bargain) was the word “sample.” Certainly, you can collect holders without that word but you also will be paying for the coin inside. Schwager’s book is geared to the hundreds of hobbyists who collect sample slabs for the slabs themselves.

One collecting approach would be to assemble as many sample slabs as you can find, Schwager writes. You can collect one from each grading service. Or try to assemble all holders from a certain company. Perhaps you might search for one special kind—and believe me, after reading Schwager’s book, you’ll be able to find just about anything under the sun (or rug, as it were), as in this PCGS “cricket slab”: 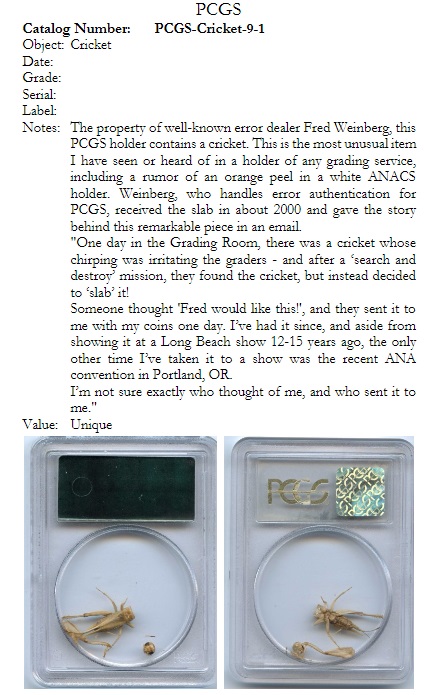 The page above gives us an idea how each slab is defined, with the crisp, insightful writing we might expect from a numismatic journalist.

In this entry below, Schwager also estimates how many of a certain holder might have been made: 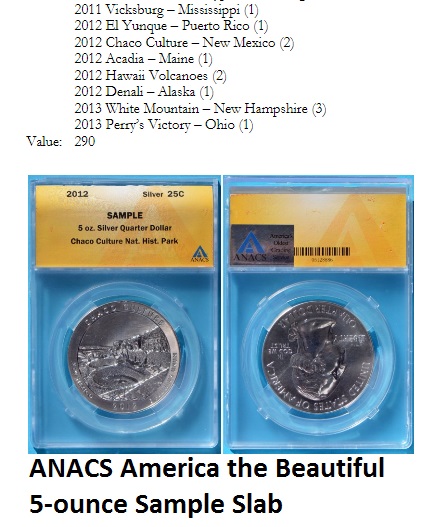 Schwager says the “America the Beautiful” holder above is “the most physically impressive of all samples.” It debuted at the September 2013 Long Beach Expo “and began to appear on eBay soon after.”

Here are few of my favorites from his book: 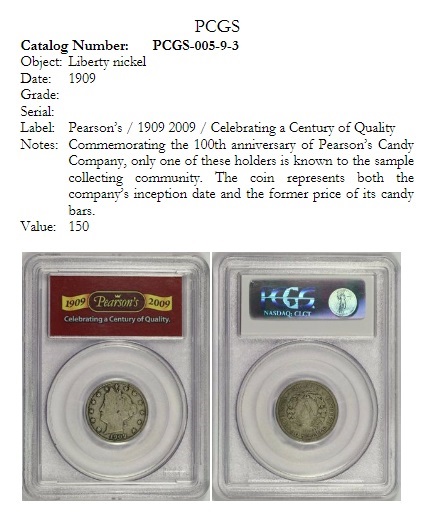 This one showcases the commercial aspects of slabbing. Many event coordinators are sending coins to companies that provide labels for special occasions. I recently acquired a sample at a table of the Freedom Fest celebration in Las Vegas. However, the Pearson’s Candy slab above is collectible both for its advertising and for its PCGS holder.

While holders and labels are the chief collectible components, sometimes the coin inside plays a role, too, as in this NGC “Mint Error” specimen, which Schwager believes is the only known example of an error coin in a sample: 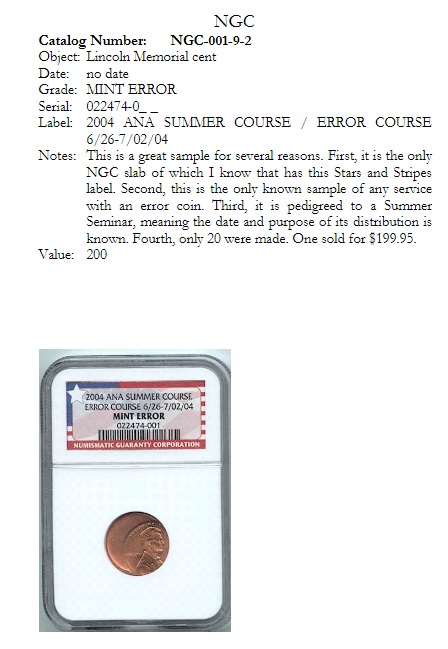 I also enjoyed paging through the entire catalog looking at other sample holders that I have seen online and never considered purchasing, such as this Compugrade one: 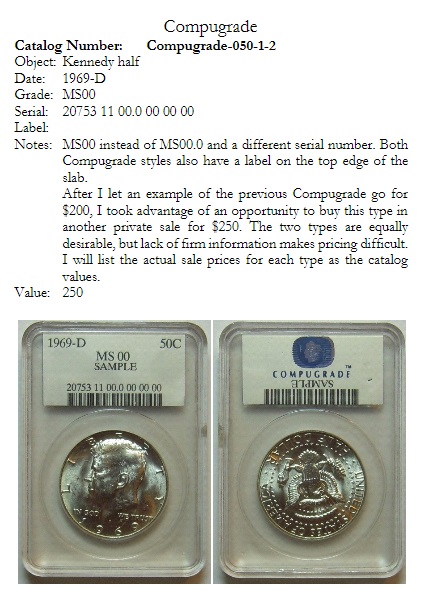 I never considered a Compugrade holder as a collectible. I was wrong. Schwager’s book has informed me about that.

Currently on eBay there are almost 150 sample slabs for sale, including this one, an early-generation PCGS slab with a worn 1907 Liberty Nickel, selling for $249.99. 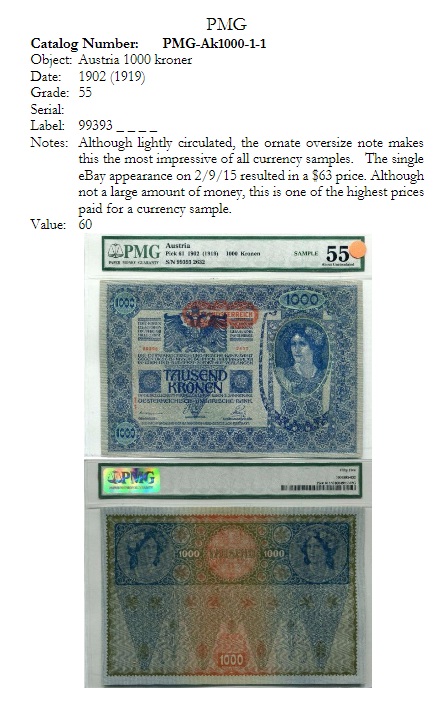 I understand the motto, “buy the coin, not the holder,” and I also understand that many readers here would never consider paying top dollar for a piece of plastic. But there is another way to look at it: These holders are part of collecting history, and the pursuit of collecting is really the fun part of what we do as hobbyists.

So what do you think? Do you collect sample holders? Would you consider doing so? If not, here’s a thought: You may just want to purchase this book and save your hobbyist dollars for coins rather than plastic.

I recommend Schwager’s catalog not only for the sharp photos of holders but also for his concise descriptions full of history and anecdotes. The work sells in softcover for $26 plus $5 shipping. You can get a PDF version for $12, or both book and PDF for $31 plus $5 shipping. (Click here for ordering information.)