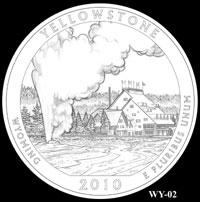 The Citizens Coinage Advisory Committee (CCAC) and the Commission of Fine Arts (CFA) each met separately this September to discuss upcoming numismatic items, which included the candidates for the quarter reverse designs for the first year in the United States Mint’s America the Beautiful Quarters Program. This is the next series of rotating quarter reverses that will, in the words of United States Mint Director Ed Moy, “honor some of our most revered, treasured and beautiful national sites.”

Each group has the authority to advise the Department of Treasury on matters regarding the images used on the country’s coinage, but the decisions are just that: advice. The Treasury is not obligated to abide by their recommendations. A classic example of this is the Franklin half dollar. The CFA was dissatisfied with both the small size of the eagle on the reverse, an element required by law, and that the design was the only one presented for review. The Department of Treasury, driven by the political forces at the time, proceeded with that design anyway.

This time around, though, there were a small set of designs from which to recommend, between 3 to 4 for each National Park or site. (View all of the America the Beautiful design candidates.) Debbie Bradley of Numismatic News reported recently that each group had their own opinions, and occasionally found common ground on the essence of what the quarter was trying to represent, if not the specifics of the imagery.

In the end, the Mint will do what it thinks is the right thing to do, and we will be seeing at least 11 more years of changing scenery in our pockets. Will I be collecting the new series? Probably, but I do not plan on purchasing the rolls directly from the Mint. Hopefully the economy will continue to pick up, and the banks will start ordering more current coins, thus getting them into circulation faster than this year.