It is almost a tradition now for Heritage Auctions to have a world currency auction in conjunction with the September show in Long Beach, California. This year, there were a total of 1,890 lots offered for sale, including a floor auction held on September 8 and an on-line only session ending on September 12. The notes offered ranged in origin from Afghanistan to Zimbabwe, and many present and former countries in between. In this review, we will take a look at some of the highlights in the sale; all of the lots offered in this auction can be viewed here. 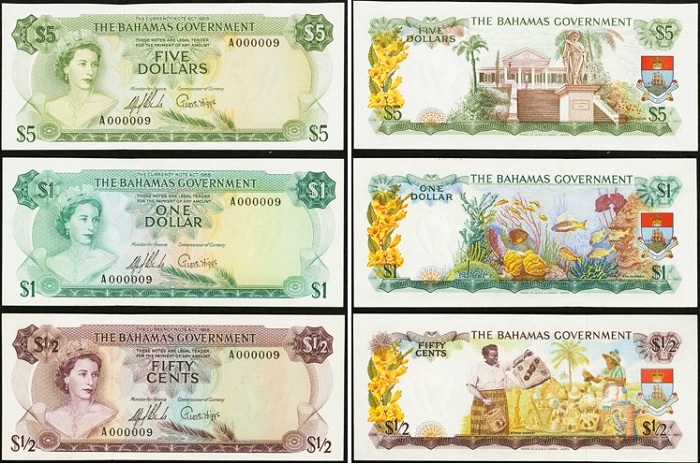 The first offering we will consider is a set that is split out over five separate lots. Lots 26064, 26065, 26066, 26067, and 206068 make up the first decimal issue of the Bahamas, issued in 1965 (Pick 17a to 25a) in various About Uncirculated and Uncirculated grades, all with the matching serial number A000009. A very scarce and popular set, it is known that a limited quantity of these sets were put aside and sold to currency collectors. Presently, however, most sets have been broken up and, while the lower denominations are occasionally encountered in higher grades (including notes released in circulation), the $50 and $100 denominations are rarities in Uncirculated grades and remain very difficult to find even in circulated condition.

The availability of these two higher denominations can be attributed to the existence of the low-serial-numbered sets, as without them these two notes would be virtually impossible to find in higher grades; the two later series with the same design, 1968 to 1974, are in fact much rarer in high grades even though issued more recently. These sold to separate buyers, except for the $50, which did not receive any bids, while the $100 sold for the opening bid of $15,000, excluding a buyers premium of 17.5%. 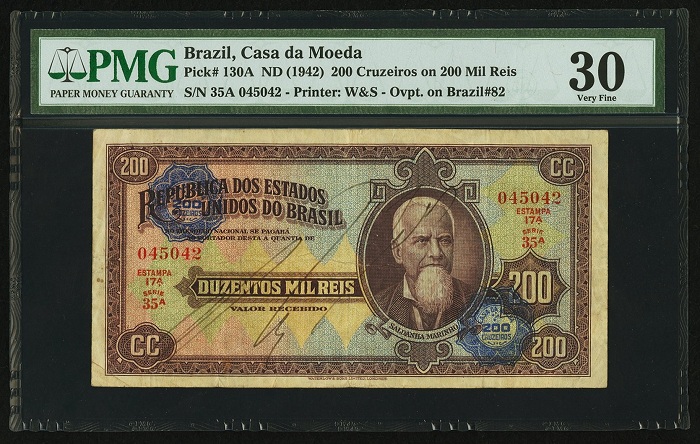 Our next lot features an overprinted Brazilian issue from the 1940s, offered as lot 26098. The note is identified as Pick-130A in the Standard Catalog of World Paper Money. Overprints such as these are relatively common on world bank notes, and are usually the result of a sudden change in the political or economical situation in a given country. When this happens, the currency sometimes changes and, if there is a lot of stock of a given issue, the printer or issuing authority may decide to overprint the old (invalid) bank notes with a new denomination. This is done as a temporary measure until new bank notes can be designed and printed. This particular note is such an issue, featuring a blue 200 Cruzeiros stamp in a rosette on an older 200 Reis issue (Pick-82), which was the result of the first re-denomination of the Brazilian currency in 1942. 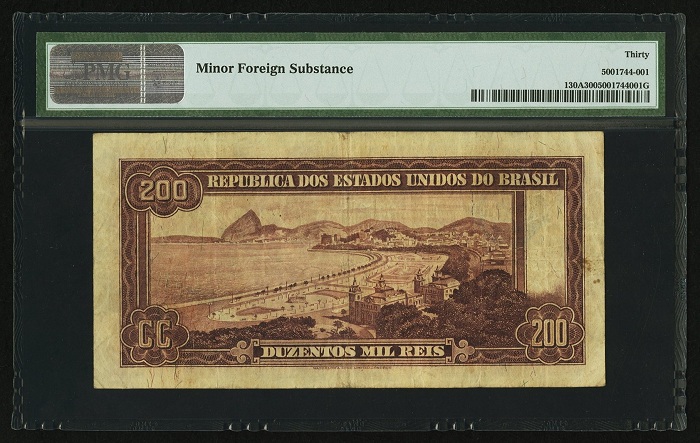 This example is a rarity among modern Brazilian bank notes and only small number of circulated pieces are known to exist. Most overprints of this denomination were printed on a different, earlier issue (Pick-81), but only a few are known on this particular design. The bank note offered by Heritage is graded VF-30 by PMG and is the only example graded by PMG, but unfortunately did not receive any bids at its opening price of $15,000. This was surprising, as most Brazilian notes in the sale sold well.

Middle Eastern bank notes have been in very high demand during the past couple of years, and the early issues of Iraq are no exception. Lot 26348 was such a note, a 1-dinar from the first issue of the government of Iraq, Pick-3, graded EF-45 by PMG. Dated 1931, the first issue saw the introduction of the Iraqi dinar, which replaced the Indian rupee and was pegged to the British pound until 1959.

The first banknotes issued by Iraq included a series of six denominations, ranging from ¼-dinar to 100-dinars, which were printed for a few short years with the portrait of King Faisal I. All are scarce, and while the 1-dinar is perhaps one of the more available denominations, it is very much in demand in nicer circulated grades. The bidding on this and other Iraqi bank notes in the sale reflected such interest, with this particular lot hammering at $3,000 excluding buyers premium. 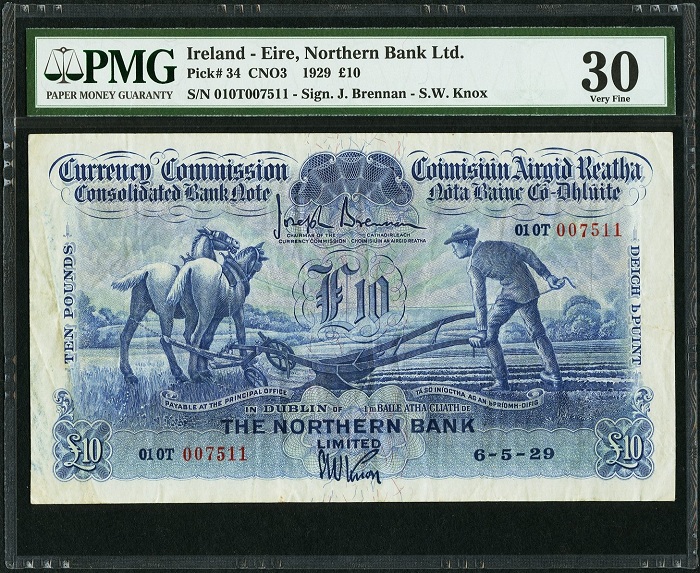 Until 1929, Ireland had a large number of banks that issued their own notes, sending a large number of different issues into circulation and creating confusion. The Currency Commission of Ireland was created by the Irish Free State and sought to resolve this issue by authorizing eight banks to issue notes of a standard design meant to replace their earlier private bank issues. These would be known as “ploughman” notes (after their design) and circulated alongside the Lady Lavery notes issued by the Currency Commission. 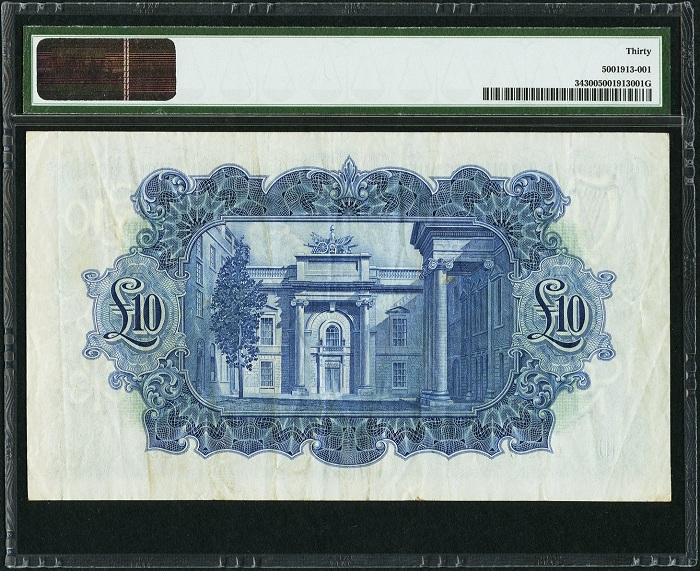 The Ploughman notes are considerably scarcer, especially in higher denominations; even lower denominations from certain banks include some very rare notes. One of the banks that was authorized to issue these notes was the Northern Bank Ltd. and lot 26401 featured an extremely scarce 10-pound Ploughman note from this bank dated 1929 and graded VF-30 by PMG. One of perhaps seven examples known to exist, this is an Irish rarity that is very seldom encountered in the marketplace, and the winning bidder ended up paying $28,000, excluding buyers premium.

Lot 26496 was such a rarity, a 1939 10-pound note graded EF-45 EPQ by PMG (Pick-9). A pleasure to see with bright colors and full originality, the piece saw lots of pre-sale bidding activity. While it did not receive any additional bids during the auction, it still hammered at $7,500, excluding buyers premium — a strong price for this piece.