The Reserve Bank of Zimbabwe have announced that from next week, holders of the beleaguered Zimbabwean dollar currency may be able to exchange them for US Dollars, the de-facto currency in use in Zimbabwe since the Central Bank discontinued the issue of their own hyper-inflated currency in 2009. From Monday, the 15th June, customers who held Zimbabwean dollar bank accounts before March 2009 can approach their banks to convert their balance into US dollars, this has been confirmed in a statement by the Central Bank governor the governor John Mangudya. The problem which arises is the exchange rate – for each one dollar exchanged, Zimbabweans will need 35 Quadrillion or 35,000,000,000,000,000 old ZIM dollars! 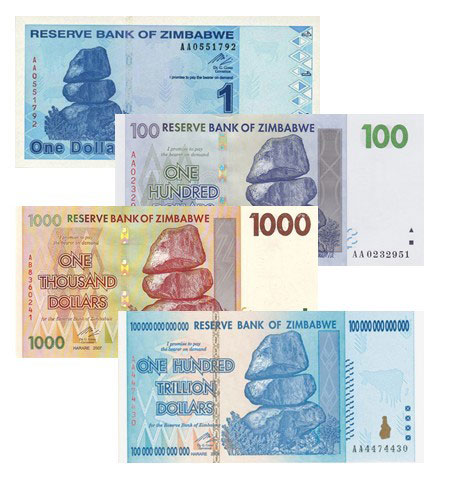 Taking into consideration that the inflation level in the ZIM dollar’s hey-day was an eye-watering 500 billion percent annually and the fact that the largest banknote printed and issued was a 100 Trillion dollar note, it still necessitated ordinary Zimbabweans carrying around bagfuls of banknotes to pay just for basic supplies and staples, if they could be found. At its height of the out-of-control inflation – which the Reserve Bank itself gave up on tracking, the cost of living climbed on a daily basis, some prices being adjusted twice-daily or in some cases, hourly, a 100 trillion banknote would not even accord the rider of a public bus in Harare, the country’s capital enough money to buy round-trip journey’s during the 5 day work week.

As President Mugabe’s troubled and sanction-ridden government officially and formally discards its virtually worthless national currency, it is inviting Zimbabweans until September to turn in their old banknotes, which some people earn more money by selling the curious notes as souvenirs to tourists. The regulation however stipulates that bank accounts with balances of up to 175 quadrillion Zimbabwean dollars will be paid the grand total of just $5. Those with balances above 175 quadrillion dollars will be paid a flat exchange rate of $1 for 35 quadrillion Zimbabwean dollars.

Zimbabweans still struggle to cope with and accept the newly released Bond coins which were produced and issued by the Reserve Bank to alleviate the shortage of coins & small change in their economy, since there is great concern that the Reserve Bank is planning to re-introduce a new currency by stealth methods. A total of 20 million USD has apparently been put aside to compensate holders of the defunct Zimbabwean dollar with this announcement. In the meantime, those tributes to what can occur when a once thriving economy is systematically run into the ground by corruption and lack of transparency such as was the Zimbabwean economy, the 100 trillion dollar banknote still fetches upwards of $5 for a nice example – far more than its official exchange rate of just 4 cents…