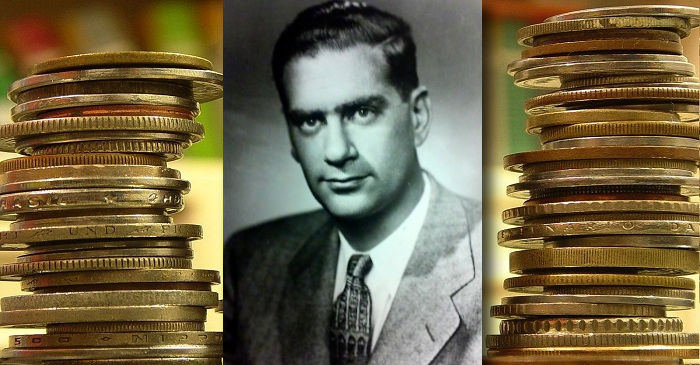 ERIC PFEIFFER NEWMAN died Wednesday, November 15, 2017, at his home in Clayton at the age of 106. Devoted husband of the late Evelyn Edison Newman for 75 years, brother of the late Ivy Steele of Chicago, beloved father of Linda Newman Schapiro of New York and Andrew (Peggy) Newman of St. Louis, enthusiastic and inspiring “Opa” to his many grandchildren and great-grandchildren. A life-long resident of Clayton, Eric attended John Burroughs School from the day the school opened in 1923 and obtained his engineering degree from MIT and his law degree from Washington University.

In response to the news, Mark Borckardt, the senior cataloger of U.S. coins at Heritage Auctions, shared his thoughts:

Rest in Peace, Eric P. Newman. Gone too soon at the age of 106. You will be missed, but certainly never forgotten.

Eric was a great lawyer, inventor, and historian, but he was best known as a numismatic collector and scholar, generous philanthropist, and inveterate traveler. He was a member of The Explorer’s Club and, with Evelyn, pioneered travel to every corner of the globe. Over the years, they enjoyed hosting family and friends both in St. Louis and at their homes in Jamaica, Martha’s Vineyard, and the bluffs of Alton, Illinois. Eric established the Newman Money Museum in St. Louis and authored over 100 books and articles, principally in the field of numismatics.

Eric P. Newman has passed away. The famous numismatist and philanthropist was 106 years old.

Kenneth Bressett, Q. David Bowers, and other living legends of the numismatic community have long identified Newman as a mentor and an inspiration. He remains an active force in the hobby, art, and science of numismatics through the continuing work of his foundation, and of course through his voluminous published works, and the benchmarks he set for other researchers and writers.

Both directly and through his role in the Eric P. & Evelyn E. Newman Foundation, the Eric P. Newman Numismatic Education Society, the Harry Edison Foundation, and the Edison Family Foundation, he helped in the creation of St. Louis institutions such as the Butterfly House, the Magic House, the Eric P. Newman Education Center at Washington University, and many of the concepts and events dreamed up by his wife Evelyn. Their marriage was an enduring and remarkable model of love, partnership, effectiveness, and concern for others.

He was a truly great gentleman, and one of the greatest numismatists of all time. This marks the final passing of an era.

Throughout his life, Newman has earned over 40 major awards in the field of numismatics, including the Medal of the Royal Numismatic Society and the Archer M. Huntington Medal, the latter of which is the greatest award of the American Numismatic Society. He is also survived by the website of the Newman Numismatic Portal, which catalogs a massive amount of numismatic information from around the world and honors Newman’s lifelong pursuit of knowledge.

Kenneth Bressett, longtime editor of the Red Book, sent his own heartfelt tribute to the Rittenhouse Society e-mail group:

Eric was cherished and respected by all. A truly unique numismatic treasure.

Per Mr. Newman’s wishes, there will be no funeral or memorial service. Any gift to your favorite charity would be a welcome tribute to his life. Messages of sympathy may be sent to .