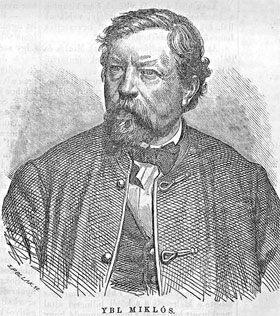 The National Bank of Hungary has issued (3rd April) two coins marking the 200th anniversary of the birth of Miklós Ybl (1814 – 1891) one of Europe’s leading architects in the mid to late nineteenth century and regarded as Hungary’s most influential architect during his career. He is most remembered for his neo-Renaissance design of the Hungarian State Opera House on Andrassy Street in Budapest.

Born to a wealthy merchant’s family on the 6th April 1814 in Székesfehérvár, Miklós Ybl completed his studies at technical university in 1831. From 1832 he was an apprentice to Mihály Pollack, a famous Classicist architect and from 1836-1840 he was employed by Henrik Koch, a renowned Classicist architect in Vienna. In November 1841, he founded the company “Architecture Institute” together with Pollack’s son, Ágoston and in 1843, he became a “fraternal stonemason master.” Ybl was commissioned in 1845 by Count István Károlyi to renovate the Károlyi castle in Fót and to build a church there to serve as the family’s burial chapel – this church was completed in 1854 and is widely seen as one of the prime works of Hungarian Romantic architecture. With these works, he established his reputation and also became the house architect of the Károlyi family.

Ybl built castles, churches and other buildings for the famous aristocrats and their families of his age, but he also drew up plans for institutions and private individuals as well. During the height of his career, Ybl took part in practically every important construction project in the capital such as the MTA building, the old parliament building (now the Italian Cultural Institute), the Customs House (now the Budapest Corvinus University) and the First National Savings Bank of Pest (Ybl Palace). It was in 1873 when he won the tender for planning the Opera House and was later commissioned to supervise its construction with its opening being celebrated in 1884. Back in 1867, the City Council of Pest had commissioned Ybl to continue the construction of St. Stephen’s Basilica carrying on from its original designer Josef Hild, who had died that year. He prepared new plans and revised Hild’s old plans, both in terms of the structural and aesthetic design. However, Ybl was also unable to complete construction of the Basilica due to his death on 21 January 1891. His last large work was the plans for the expansion of the Buda Castle. 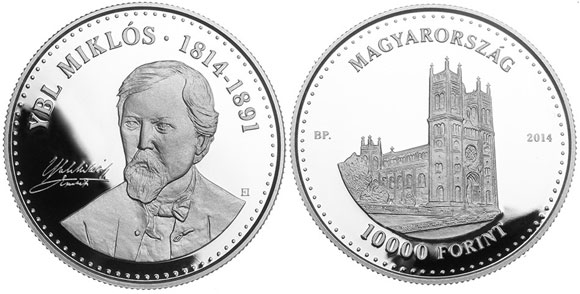 The coins, struck by the Mint of Hungary and designed by Ildikó Eross includes a three-quarter facing portrait of Miklos Ybl looking to the left. The text “YBL MIKLOS 1814 – 1891” is positioned along the upper edge of the coin along with a facsimile of Ybl’s signature which is placed just to the lower left and just above the right shoulder of Ybl.

The reverse shows the edifice of the the Károlyi church in Fót with the text “MAGYARORSZAG” and the denomination appearing above and below the primary motif along the edges respectively. The year of issue “2014” and the Mint’s mintmark of “BP” are positioned on either side of the church.

With this issue, the National Bank is continuing its newly introduced policy of issuing the precious metal commemorative coin’s design equivalent in a base metal and issued for its face value – though in very limited quantity. The Mint’s first non-precious metal equivalent product was issued in March with a 2000 forint coin depicting the same design appearing on the National Bank’s gold commemorative coin of 50,000 forint depicting Mary, Queen of Hungary.

For more information on these and other coins issued by the National Bank of Hungary, please visit the website of the Mint of Hungary at: http://coins.hu/ Information offered in Hungarian and English, international orders dispatched.