With the Australian Army Chaplains leading this year’s Anzac Day veterans’ march in recognition of a century of ministry and pastoral support, they have been recognized on the latest collectible coin in the “Australia Remembers” series from the Royal Australian Mint. 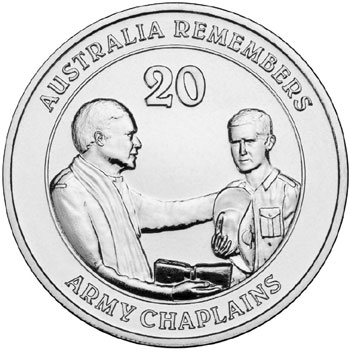 The reverse of the coin depicts both Chaplain and soldier, as he is given both moral and spiritual comfort. The coin’s denomination of “20” is positioned to the middle upper half with the text “AUSTRALIA REMEMBERS” and “ARMY CHAPLAINS” both above and below the primary design.

The Australia Remembers coin series pays tribute to past and present Australians who played important roles during times of war, conflict and peace operations. The Army Chaplains are an integral part of the Defence community in which they serve, are known as a friend to all and a helper to those in need. This series has previously honored Australian Service Nurses, the Lost Soldiers of Fromelles, War Historians and Australian Merchant Navy.

For more information on this and other coins offered by the Royal Australian Mint, please visit their website at: http://www.ramint.gov.au/ Information offered in English, international orders fulfilled.