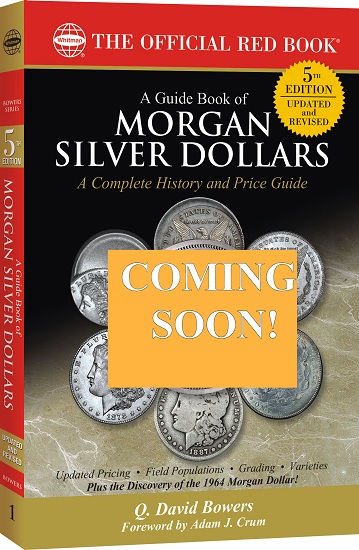 Whenever the coins of the United States are ranked for popularity, the famous Morgan silver dollar rises to the top of the list. Here at Whitman Publishing headquarters we clearly see its universal appeal. Hobbyists buy thousands and thousands of our folders, albums, and other holders to store and display their Morgan dollars. We get letters, emails, and phone calls about the hefty old coins. When we go to coin shows, collectors and investors are talking about them. As we work on each year’s edition of the Guide Book of United States Coins (the “Red Book”), we hear plenty of Morgan dollar observations and market analysis from coin dealers around the country. Meanwhile, outside the realm of the active hobby community, this is one of the “rare coins” that even non-collectors are likely to know about. They saw one in Grandma’s old purse, or offered in a Sunday-newspaper ad, or maybe tossed onto a bar in a Hollywood Western. The Morgan dollar is a coin that sparks the imagination. Once it entered the American consciousness it never left.

Given this widespread interest, it’s easy for a publisher to answer the question, “Why make yet another book about Morgan dollars?” Quite simply, America’s most popular coin deserves as many good books as the hobby community can read and enjoy. From observing the book market over the past 12-plus years, I believe that a rising tide lifts all ships when it comes to Morgan dollars. Because of the hobby’s longstanding interest in these coins, each new volume starts out with the potential of a built-in audience. Of course, for best success a book has to be well written and share valuable information. From there the appreciative audience and the evergreen subject combine to create even more excitement over Morgan dollars.

David Bowers’s Guide Book of Morgan Silver Dollars, billed as “A Complete History and Price Guide,” is the modern popular classic in the field. The first edition was published in 2004. Of course, by then Bowers was widely recognized as a subject-matter expert (not just for Morgan dollars, but across all aspects of U.S. numismatics). His published work on these coins goes back decades; a short list includes the Comprehensive U.S. Silver Dollar Encyclopedia (1992) and the hugely popular two-volume Silver Dollars and Trade Dollars of the United States: A Complete Encyclopedia (1993), not to mention numerous chapters, essays, and articles published in other books and in hobby newspapers, journals, and magazines.

The second edition of this guide book followed in 2005 with updated pricing and certified-coin population data. A new appendix studied the Morgan dollar patterns of 1878.

In 2007 we published the third edition. By this time the modern renaissance in numismatic publishing was well under way. No longer were black-and-white photographs acceptable to the hobby community; the third edition was published in full color. (Yes, nuances of color are noticeable in silver coins, which are not as colorless as a non-collector might think!) Again the book’s coin-by-coin pricing was updated, reflecting the ever-changing market, and certified populations captured the latest data. New research was incorporated into the manuscript—Morgan dollars are a robust and very active field of study with new discoveries regularly being made. The book’s layout and typography were spruced up to make it as pleasantly readable as possible and easy for the reader to navigate.

In 2012 the fourth edition came out. Again fully updated and revised, the new volume added an illustrated appendix of misstruck and error Morgan dollars, showcasing some truly outlandish coins including double strikes and off-centers, along with insight to guide smart purchases. What did the hobby community think of Morgan dollars at this point? The fourth edition’s updated pricing reflected continuing enthusiasm. Many common dates had increased in retail price by 50 percent or more since the book’s first edition debuted eight years earlier, and rare dates and varieties had doubled—or more—in value. The Morgan dollar remained the King of American Coins. 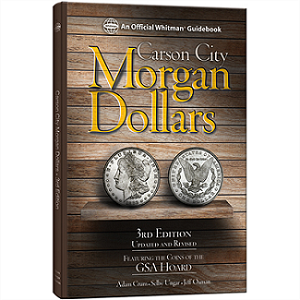 By the time the Guide Book of Morgan Silver Dollars established itself as the coin’s modern standard reference, other Whitman books had joined the party. In late 2009 (with a copyright date of 2010) we published Carson City Morgan Dollars: Featuring the Coins of the GSA Hoard, by Adam Crum, Selby Ungar, and Jeff Oxman. “This book begins with the accidental discovery of gold in California in 1848,” we announced at the book’s release. “The struggles of adventurers in the Gold Rush . . . the Nevada silver boom of the late 1800s . . . the creation of the Carson City Mint . . . these are some of the rich historical veins that Crum, Ungar, and Oxman mine in Carson City Morgan Dollars. However, it’s not only the Old West history buff who will strike it rich in this book. Collectors and investors will benefit from a detailed coin-by-coin study of every Morgan dollar ever struck at the famous CC Mint, including selected VAM (Van Allen–Mallis) varieties. The General Services Administration hoard—millions of Treasury-bagged silver dollars brought out of storage in the 1970s and sold to collectors—is a fascinating ‘main character’ in this story. The authors describe the government’s sales of these coins, and their effect on the hobby. Then they share detailed advice on ways to collect Carson City Morgan dollars.”

Carson City Morgan Dollars was expanded and revised in a second edition released in 2011, then updated to a third edition that debuted at the American Numismatic Association’s National Money Show held in Atlanta in March 2014. Even with its specific focus on a subset of Morgan dollars, there was plenty of new material to justify the new edition. It was updated with additional historical photographs, revisions from ongoing research, new coin values and certified-coin populations, and fresh market commentary. 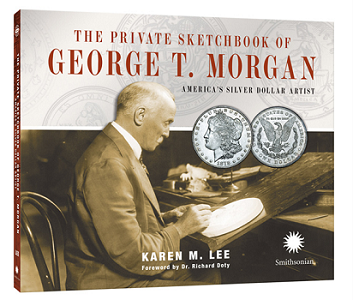 In November 2012 (copyright date of 2013) Whitman published The Private Sketchbook of George T. Morgan, America’s Silver Dollar Artist, a remarkable new book made in cooperation with the Smithsonian Institution. “Today most collectors know Morgan as the father of this legendary silver coin,” we noted. “Some specialists are familiar with his designs for commemoratives and medals, and his significant work in U.S. pattern coins. But who exactly was George T. Morgan? Karen M. Lee, a curator of the National Numismatic Collection housed at the National Museum of American History, finally answers that intriguing question. Introducing Morgan’s never-before-published personal sketchbook, and with unique access to family photographs and documents, Lee reveals the man behind the coins. The Private Sketchbook of George T. Morgan is an eye-opening immersion into what Lee calls the designer’s ‘life of art and labor.’” This book, like the others mentioned herein, went on to win literary awards. 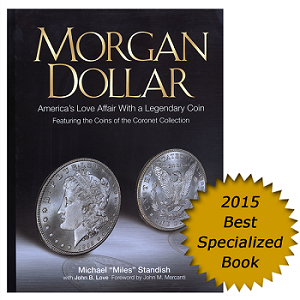 Next, in 2014, a new Whitman book was published, authored by Michael “Miles” Standish assisted by the research/writing team of Charles Morgan and Hubert Walker. In Morgan Dollar: America’s Love Affair With a Legendary Coin, various sections discuss the United States during the Morgan dollar era; the anatomy of the coin’s design; a market study going back to 1946; a year-by-year analysis of the series, including Philadelphia, New Orleans, Carson City, Denver, and San Francisco coins; and Morgan dollar Proofs.

Today the fifth edition of the Guide Book of Morgan Silver Dollars—available next month, September 2016—continues the ongoing exploration, conversation, and fascination. Features include the requisite updated pricing, a useful new index, fresh illustrations, and some startling new research from the archives of the Philadelphia Mint—information never before published, which I guarantee will stir up the hobby’s imagination and get people talking.

Can we expect anything less from the wonderful and legendary Morgan dollar?