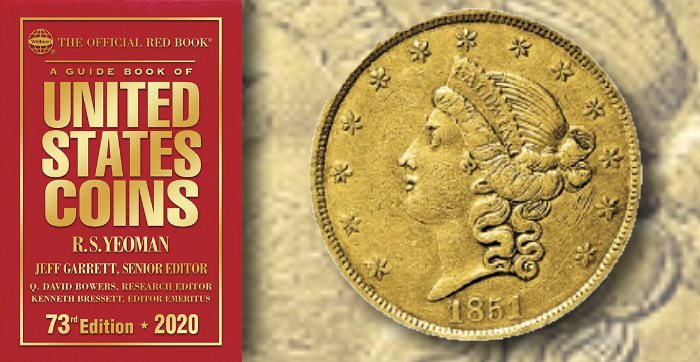 Coin Update continues its series dedicated to reflecting on the long history of Whitman Publishing’s Guide Book of United States Coins, also known as the Red Book. On April 9, the highly anticipated 73rd edition of the Red Book debuted. “Red Book Recollections” features personal reflections written by Red Book contributors, collectors, and others with the aim of providing different perspectives on the long-lived reference work.

Our next narrative comes from P. Scott Rubin:

The first coin book I ever owned was a Red Book. The year was probably 1955, and I bought a used copy from a neighbor named Jimmy Fritz. Jimmy was about two years older than me (I was seven), and he sold me his sixth edition because he had just bought a new Red Book. Jimmy collected both stamps and coins, as did I, and told me that his great-uncle was big in the stamp business. Years later I found out that his great-uncle was, in fact, Mekeel of Mekeel’s Weekly Stamp News.

By the time the 1960s rolled around, I had started to collect coin auction catalogs to quench my thirst for information about coins that I could never afford. In the mid-’60s I was regularly receiving auction catalogs from Kagin’s and shortly thereafter from Stack’s. I decided to keep track of some rare U.S. coins when they appeared at auction, but the question was which coins I should track. I decided to use the Red Book to help me, so I went through the then-current edition and made a list of all regular-issue coins that had sold for $1,000 or more. Over the next few years, a few coins were dropped from the list and a few were added. The ones that I added were newly listed rare Red Book varieties. Today the list totals over 65 thousand auction appearances of over 200 coins. Over the years I have been called upon to supply collectors, dealers, and auction houses with information from the data I have been compiling since the 1960s. I was also honored to be able to assist Kenneth Bressett on the Red Book.

I have 62 editions of the Red Book. Years ago I decided to complete my collection of Red Books by buying the editions I did not have. At the time most were readily available, but the first edition was harder to get. Luckily for me, my first coin dealer, Ed Hipps, had helped me find not only many coins but also many old auction catalogs and books. So when I asked Ed if he had a copy of the first edition of the Red Book to sell me, he led me to some bookshelves in the back of his store and told me to pick the one I wanted—he had four or five to choose from. I looked them over and found one in almost mint condition. I am so glad I bought it at that time, because its value has risen steadily since Ed sold it to me.

I had decided to put together a complete set of Red Books when I tried to create a list comparing the past selling prices of certain rare coins to their current values. Since there was no reliable weekly, monthly, or yearly price guide for coins outside of the Red Book, I found that I needed a complete set. After completing my Red Book collection I decided that I might as well complete my set of Blue Books, which I did.

By the 1970s, a few collectors and dealers realized there was a profit to be made from selling numismatic books and auction catalogs as collectibles. There were already a handful of numismatic book dealers selling these items to collectors: Aaron Feldman, James Brown, Frank and Laurese Katen, and George Kolbe (originally as G. Frederick Kolbe). These dealers were specializing almost exclusively in numismatic books by 1970. The hobby that had once been transacted almost entirely on a collector-to-collector basis was now starting to see dealers advertising and holding auctions of coin books.

It was also about this time that people started paying attention to various editions of catalogs and books. I learned that there were two printings of the first edition of the Red Book, and that one of the 1960s editions contained a printing error. I checked my first edition and was happy to discover that it was a first printing. I was not so happy about the error edition, since I had cut out the error page years before. Stupid me!