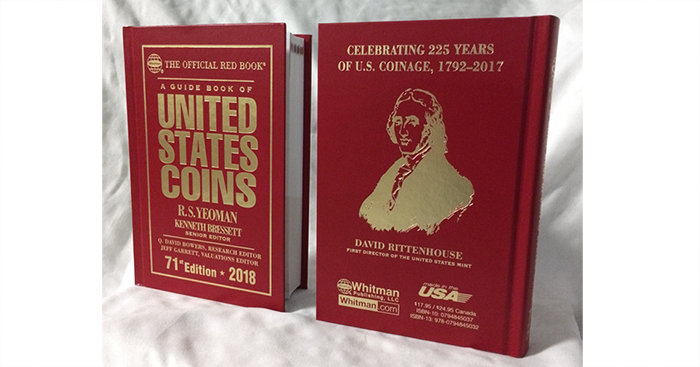 Our next narrative comes from Ginger Rapsus:

My first Red Book was the 1967 edition. I had just discovered coins and collecting, and I was happy to find a guide to every United States coin I could find, and some I had never heard of. I still have that 1967 Red Book, along with a number of other editions.

I saved every copy of the Red Book, and if a local dealer wanted to get rid of his stock, I was happy to take them off his hands, for something like 50¢ each. I learned that a few other collectors liked the Red Book, too, which led me to research and write an article for The Numismatist on how collectible and desirable older copies could be.

This was 1989. Since then, the Red Book has come into its own as a collectors’ item. Hardcover and softcover varieties have been issued each year since 1993. Some buy the hardcover edition every year, to keep their collection more uniform. Others buy the softcover or spiralbound book, for the price and the convenience. The completist will buy both versions every year!

When researching my story, I found that a few books with errors exist, giving Red Book collectors a challenge. Since then, many different editions have been issued, including some with special covers commemorating the ANA and FUN conventions and the SS Central America, as well as a scarce leatherbound edition given to members of the Numismatic Literary Guild at their banquet. As an NLG member, I am sorry I missed out on that one.


The ANA World’s Fair of Money was held in Denver in August 1996. While at the show, I spotted a specially covered Red Book to commemorate the 50th anniversary of the Red Book, in the old-fashioned maroon cover. A little souvenir booklet was also available, a small cardboard holder shaped like a Red Book, with spaces to hold dimes dated 1946 and 1996. I picked one up to keep with my Red Book set and found out after the show that some of the holders had silver 1946 dimes already placed inside.

The banquet held at the World’s Fair of Money is always a fun time, and part of the fun is seeing what kind of goodies you’ll find at your table. A Red Book with a special ANA cover appeared at the 1992 banquet. The 2000 banquet in Philadelphia had a special giveaway, too—copies of the 2001 Red Book with the first page embossed with the Liberty Bell and the date.

Red Book fans will also want to own a copy of the reprinted 1947 edition. The back of the book features a guide to the many changes in the Red Book, prices, and the coin market in general, making this a must for any numismatist interested in the historical aspect. It’s also interesting to see the low prices of coins in the 1947 edition. They all seem like such bargains now!

The Red Book will always be a favorite. Collecting these books can be interesting, challenging, and fun—just like collecting coins.