The Royal Canadian Mint has released a rectangular shaped 1.5 ounce silver coin to mark the 50th anniversary of Canada’s national flag. The unique shape of the coin mimics the flag’s own rectangular outline.

This represents the first rectangular-shaped 1.5 ounce coin with enamel issued by the Royal Canadian Mint. The vibrant red and white enamel have been applied to the reverse design of each coin to recreate the famous colors of the Canadian flag. 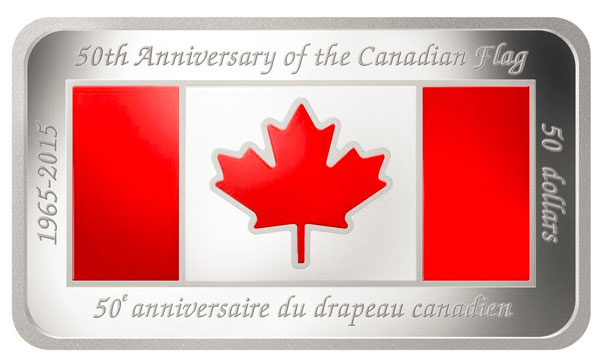 The reverse design features the unmistakable Canadian Flag, with the iconic maple leaf as the central focal point. The engraving has been enhanced by the use of enamel to recreate the distinctive colors of the flag. The inscriptions read in English and in French “50th Anniversary of the Canadian Flag / 50e Anniversaire du drapeau canadien” along with the anniversary dates “1965-2015”, and the face value of “50 dollars”. 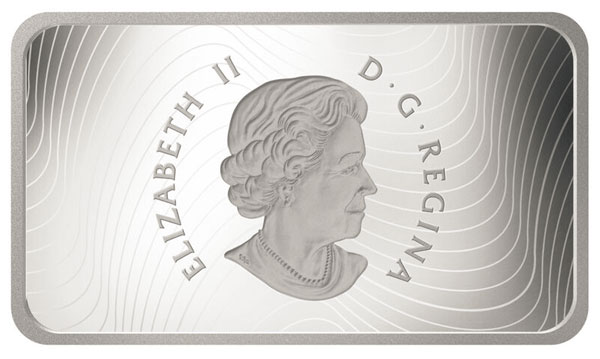 The obverse carries the Susanna Blunt effigy of Queen Elizabeth II with the inscriptions “ELIZABETH II” and ” D · G · REGINA”.

Each coin is struck in 1.5 ounces of 99.99% pure silver to proof quality. The dimensions of the coin are 49.8 mm by 28.8 mm with a mintage of 10,000 pieces. The coins are encapsulated and presented in a maroon clamshell with graphic beauty box.