The second D. Brent Pogue Collection auction, jointly organized by Stack’s Bowers and Sotheby’s, took place in New York City on September 30. This part of the collection contained various silver denominations from the earliest years of the United States Mint in Philadelphia, including Flowing Hair silver dollars, as well as various gold denominations of the Classic Head and Capped Busts designs. In this recap we will take a look at some of the most noteworthy results from the auction. Please note that all prices mentioned include a 17.5% buyer’s premium. The complete list of prices realized can be found on the Stack’s Bowers Web site.

The sale commenced with Capped Bust half dollars. An extremely popular collecting field in American numismatics, many of the pieces in the Pogue collection were among the finest-known examples of this iconic type, which for many years in the early 19th century was the largest silver denomination struck by the Philadelphia Mint. The level of demand for high grade examples of this type became immediately apparent with the third lot in the auction, lot 2003. This included a PCGS graded MS-66 1807 Capped Bust Left dollar, the single finest 1807 half dollar certified by PCGS. It realized $258,500 after a pre-sale estimate of $100,000-$150,000.

The Capped Bust half dollar series is intensively collected by die variety, with varieties identified by so-called Overton numbers, after the author of the main reference work on the series. Rare die varieties are always much sought after by specialists hoping to complete a series, a daunting task as even a basic set by die variety includes 558 coins. One of these is the very rare and famous 1817/4 O-102 half dollar, with only five examples known to exist; another six known pieces are identified as O-102a and exhibit a dissecting obverse die crack. Lot 2021 in the Pogue collection was the finest known O-102 1817/4 half dollar, graded VF-35 by PCGS. It realized $282,000, the highest price paid for a Capped Bust half dollar in the sale.

As previously reported, this part of the Pogue Collection contained one of the most famous 1794 silver dollars in existence: the Gem (PCGS MS-66+) Lord Oswald coin, pedigreed all the way back to the 18th century. One of just two examples of this iconic issue of 1,758 coins graded this high by PCGS, the coin realized $4,993,750. Struck at a time when the Philadelphia Mint had just opened and struggled with inefficient machinery, the survival of this coin is a miracle, as most 1794 Dollars in existence are well-circulated and damaged. Demand for this iconic and well-known issue is always high, as attested by the sale price of this coin, which is a new record for a circulation strike of this issue, only surpassed by the single known specimen that sold for over $10 million in January of 2013.

The gold coins in the collection also saw intense bidding interest. These gold coins represented quite a bit of money back in the late 18th and early 19th centuries, and few Americans ever would have seen such coins, which were mostly used for larger business transactions. One of the prime rarities in the early American gold series was offered as lot 2074. Dated 1798, the coin features a small eagle reverse, a design that had already been replaced in 1797 and so marks an interesting peculiarity. It appears that the following year, however, an old die was found, and as the Philadelphia Mint of the 18th century was always trying to save money, it was put back in use, paired with a new 1798 obverse die. The result was a short-lived and rare coin, of which only seven examples are known to exist today. The coin in the Pogue Collection was graded AU-55 by PCGS and realized $1,175,000. 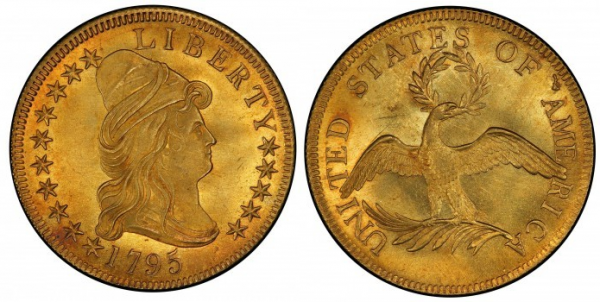 Prior to the introduction of the Double Eagle or Twenty Dollar Gold Piece in 1850, the largest denomination struck by the United States Mint was the Eagle, or Ten Dollar Gold Piece. First struck in 1795, it was discontinued after 1804, not to be struck again until the late 1830s. The earliest coins are rare, especially in Uncirculated condition, as their large size and soft metal made them susceptible to wear, and–as they represented a large sum of money at the time–very few, if any, were saved. Lots 2091 and 2092 represented two varieties of the first year of issue of the denomination–the first with 9 leaves under the eagle on the reverse, the latter with 13 leaves. The 9 leaves variety, graded MS-63+ by PCGS is the finest known, and realized $1,057,500, while the 13 leaves variety was graded MS-66+ by PCGS and represents the single finest known example of the type. This ultimate type coin, as it could be called, saw intense bidding, realizing $2,585,000.

These are just some examples of the prices realized in this historic sale. As we can see, high-grade, rarely offered coins are still in much demand, realizing substantial prices. With this being just the second installment in the Pogue Collection, many more rarities will come up for auction at the next sale, scheduled for February 9, 2016. While it is not known yet what will be offered in the third auction of the collection, we will be sure to cover it extensively, as it will prove to be another historic auction.