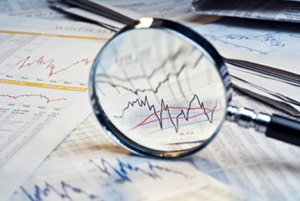 A major theme in my writings is that the mainstream media is not doing its job.  Far too often, the media is taking spoon-fed economic and financial headlines from governments and their major trading partners and passing along the information as being true.  There are too many instances where the underlying information negates or contradicts the thrust of the headlines, but the media fails in their duty to inform the public of the truth.  This failure could be from lack of comprehension, simple laziness, or perhaps because the media support the philosophy of the headlines.

So, much of what I write is devoted to shining light on the data that the mainstream media ignores, omits, or distorts.  Here are some more examples.

From a lot of headlines in the past month, many people might be sensing that the US economy is slowly starting to improve.  This apparent good news could come from reports that consumer sales are up, banks are earning more profits, consumer prices are holding the line, and employment is rising.

Unfortunately, each of these points is unfounded and contradicted by the underlying facts.

Sure, the Bureau of Economic Analysis (BEA) reports that general business activity in the United States has recovered to its pre-recession levels.  If that really were true, you would think that at least one other major economic series would confirm that information.  None of them do.  While the BEA claims that Gross Domestic Product (GDP) is growing, inflation-adjusted data for retail sales, production and housing show either slow growth or outright contraction on either month-to-month or year-to-year basis.

While the Commerce Department Bureau of Labor Statistics most recently reported that GDP has grown almost 2% from year earlier levels, researcher John Williams at www.shadowstats.com reports that US GDP has been continuously declining since 2007!

Just after Thanksgiving weekend, there was an outpouring of positive reports on holiday season sales.  Some of these were derived simply by counting the number of people in malls rather than obtaining actual sales data.  Then there were reports of higher car and truck sales by the manufacturers.  Well the truth is coming out now, and it’s not very rosy.  Supposedly, overall holiday shopping exceeded 2010 levels by 3-4%.  However, if you discount this increase by the more than 3% consumer price increase from the prior year as reported by the Bureau of Labor Statistics, sales were flat.  If you instead use real world consumer price increase data such as computed by John Williams, consumer prices were almost 6% higher than a year earlier.  Using this data, the quantity of goods sold in the 2011 holiday season was actually down from what was sold in 2010!

It’s no wonder that chains like Sears, Kmart, and Bloomingdale’s announced more store closings and others like Tiffany reported falling sales.

Even the automotive sales figures are rigged.  Automotive companies record sales when vehicles are moved onto dealer lots, not when they are sold to consumers.  In 2011, dealer inventories have grown so much that this almost completely accounts for the so-called boom in automotive sales.

Then there are the deceptive quarterly profit reports from major US banks.  Bank of America claimed it made $2 billion in the most recent quarter.  However, in the fine print, the Bank acknowledges that it had not yet recorded bad debt losses from fraudulent mortgages by $5 billion.  As part of its assets, Bank of America lists $125 billion in home equity loans.  A high percentage of home mortgages are underwater, where the mortgage exceeds the value of the property—in which case the home equity loans are technically worthless!  It is likely that Bank of America has yet to book sufficient losses that it is facing on this category of assets.

As for JPMorgan Chase, it was sued last week for allegedly fabricating documents in order to recover a greater amount of funds in bankruptcy proceedings.  I suspect that such suits will likely be settled before trial, at a cost to the bank that is probably going to run into the billions.

For all of 2011, the construction industry broke ground on 607,000 new homes, according to the Commerce Department.  That was up 3.4% from 2010, which is good news.  However, the median average price at which all homes, new and previously occupied, changed hands in 2011 declined to its lowest level since 2002.  For the housing sector to return to normal, new housing starts would have to rise to 1 to 1.5 million per year.

According to the Department of Labor Bureau of Labor Statistics, there were 135,254,000 non-farm civilian workers in the US in December 2008.  Three years later, even though the US population increased by several million, the number of non-farm civilian workers had declined by over 2-1/2 million.  There were just over 8.9 million unemployed in December 2008, but the total soared to more than 13.7 million three years later.

The unemployment picture is supposedly improving.  However, John Williams calculates the unemployment rate using the methodology employed by Bureau of Labor Statistics until 1993.  By that formulation, US unemployment levels are currently about 22%.

Interest rates and mortgage rates may be close to all-time record low levels.  And the Dow Jones Industrial Average may be holding at elevated levels even as US investors are consistently abandoning the stock markets.  The interest rates and Dow Jones average are all manipulated by the US Treasury and the government’s trading partners—sometimes openly admitted.

If things were really so wonderful as the mainstream media is reporting, then there would be no reason for the Federal Open Market Committee to announce any major plans at the conclusion of their meeting Wednesday.  But I would not be at all surprised if they stated that they find it necessary to stimulate the real estate market.  However carefully they may couch their language, I expect the Fed will start to unveil the next round of inflation of the money supply, this time on the order of $1 trillion.

Such a step will inevitably drive down the value of the US dollar even further.  Gold and silver prices will rise even faster.  And those who believed the mainstream media and failed to protect themselves will be even poorer.