The Royal Mint have launched (9th January) a limited edition two coin set which brings together the Queen’s golden and Diamond Jubilee anniversaries with the presentation of the gold crowns issued in 2002 and for the latest 2012 event. Queen Elizabeth II becomes only the second British monarch to achieve a 60-year reign, an historic achievement matched only by Queen Victoria in 1897, The Queen’s great-great-grandmother. 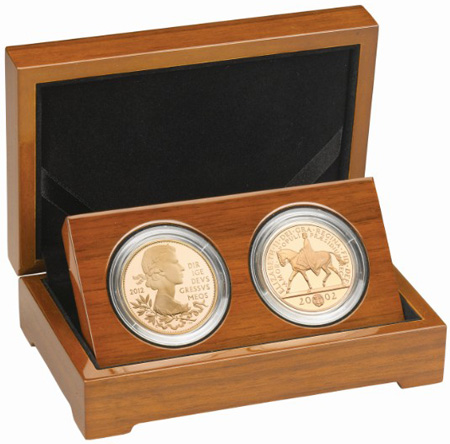 The 2002 dated coins were issued ten years ago and specially commissioned to mark the 50th year of reign or, “Golden Jubilee” of HM Queen Elizabeth II. The obverse depicted the Queen on horseback, the third time in which she was portrayed on UK national coinage as such (the other coins being issued in 1953 and 1977) and also included a reverse portrait with Her Majesty wearing the robes of the order of the Garter.

The latest coin which marks 60 years incorporates both old and new portraits for this once-in-a-lifetime event. A new portrait unveiled October 2011 shows a majestic and mature head and shoulders depiction of the Queen also in the robes of the order of the Garter together with a recreation of the 1953 portrait created by artist Mary Gillick on the reverse of this commemorative crown which was used on circulation coinage in the United Kingdom and the commonwealth.

As two of the primary portraits were designed by Ian Rank-Broadley FRBS for both the 2002 and 2012 commemorative coins, this limited edition set includes an exclusive numbered Certificate of Authenticity personally signed by the artist / sculptor himself. Displayed within a bespoke presentation case of high gloss varnished wood veneer, the set is limited to just 60 sets worldwide for distribution.

For more information on this and other coins on offer by the Royal mint, please visit their website at http://www.royalmint.com/