The Royal Mint has launched the precious metal versions of the 2014 Crown coin – this year paying tribute to the country’s last Stuart Monarch, Queen Anne. As the daughter of King James II and successor of her sister Queen Mary II and brother-in-law King William III, she reigned as the last Monarch of the Stuart Dynasty from 1702 to 1714. 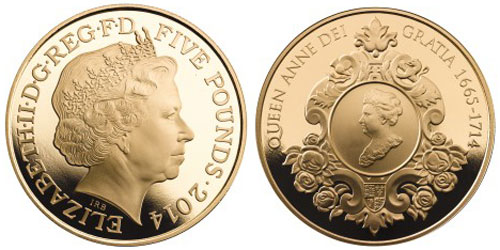 Reigning both England and Scotland since 1603, The English crown came to the Stuart King James VI of Scotland upon the death of Queen Elizabeth I who died childless, she herself being the last Tudor Monarch. The English crown was inherited by the Stuarts of Scotland through Margaret, the sister of King Henry VIII, who married James IV and whose great-grandson eventually became King James I of England. It was during the reign of Queen Anne that the two crowns of England and Scotland were formally united to form the Kingdom of Great Britain under the act of union in 1707, this entity lasted until 1800 when the United Kingdom of Great Britain and Ireland came into force from 1801 to 1922.

Queen Anne’s reign is also remembered for the Act of settlement – 1701 which stipulated and outlined provided that, failing the surviving legitimate issue of Anne or William III by any future marriage, the Crown of England and Ireland would pass to Sophia Dorothea, Electress of Hanover, and as such, to her Protestant descendants. Sophia was the granddaughter of King James I (VI) through his daughter Elizabeth, who was the sister of Anne’s grandfather King Charles I. Eventually, the crown after the death of Queen Anne – passed to the son of Sophia Dorothea, Prince George of Hannover who ascended the British throne as King George I. It is through this lineage that the British Monarchy today is descended from. 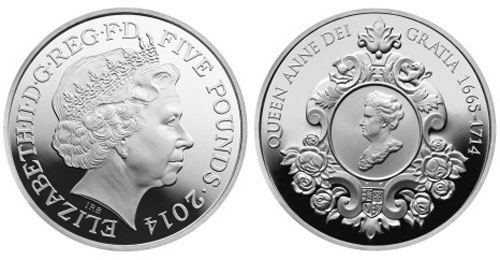 The coin, designed by sculptor Mark Richards, (who designed the 2011 Royal Wedding crown) includes a small cameo miniature portrait of the Queen surrounded by a decorative frame. The obverse features the current coinage portrait of Her Majesty The Queen, designed by Ian Rank-Broadley FRBS.