With a total of 8.4 million in overall final bids, a 35 % increase, and only 277 lots still left for post-auction sale out of the approximately 5,700, Künker’s latest auction was another one for the record books. And it’s coins – be they ancient, medieval or modern era – that are currently fetching top prices.

The outcome of the Osnabrück fall auction turned out to be unexpectedly high: instead of the 6.1 million EUR estimated, overall final sale prices totaled an astounding 8.4 million, an increase of over 35 percent. Roughly 5,500 lots were sold between October 8th through 12th, and a mere 277 items not sold in the room went into post-auction sale. Collectors and dealers alike were quite literally spoiled for choice: once again, the three catalogues, 216 through 218, offered outstanding material, some of it also very rare. The real showstopper, however, came in the form of a quadruple thaler of King Christian V of Norway – it went to an unknown telephone bidder for an amazing 130,000 EUR. 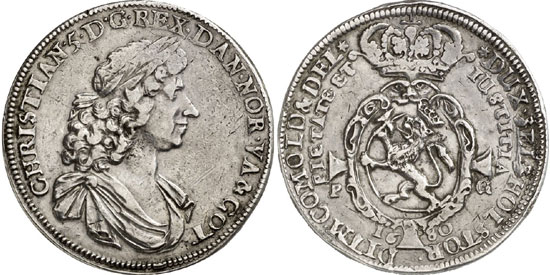 The action got underway with the roughly 1,600 ancient numbers from catalogue 216. All told, they brought in an impressive 3.3 million EUR in overall final sales, eclipsing the estimate of 2.6 million. The suspense and excitement was palpable right from the outset – a Pannonian tetradrachm estimated at 300 EUR went for 2,600 EUR, and a second piece far surpassed its estimate of 750 EUR to go for a final price of 5,500 EUR!

Not to be outdone, the Greek coins managed some impressive leaps of their own. Take, for example, an exceedingly rare bronze coin from Populonia, which climbed all the way from 150 to 2,800 EUR; or, perhaps, a classic tetradrachm from Syracuse, once part of the Kunstfreund Collection, which outdid itself fivefold, reaching a very substantial 50,000 EUR. A gold stater from Panticapeum featuring a satyr and gryphon made another sizeable jump, from 40,000 to 80,000 EUR.

Moving right along to the Roman coins, there are a number of outstanding aureii that beg reporting. Deciding exactly which ones to briefly mention here is no easy feat! Domitian’s aureus from the year 82 definitely needs to be included (Estimate 20,000 EUR, Final price 42,000 EUR), as does Hadrian’s from 134/138, depicting lovely portraits of him, Trajan and Plotina (Estimate 35,000 EUR, Final Price 40,000 EUR), and the splendid aureus featuring the portrait of Faustina II (Estimate 7,500 EUR, Final Price 12,000 EUR). It would seem that even allegedly “non-precious” items too can achieve ‘”precious” results, as shown by a sestertius of Commodus from the year 190 estimated at 1,500 EUR that sold for 5,000.

There were over 2,600 lots from Medieval and Modern Times featured in catalogue 217, with a total volume of 1.7 million EUR. Growth rates of over 50 percent, however, yielded an overall final total of 2.7 million EUR. A fitting example from the medallions section is the silver medallion from the stamps of the great royal seal of the Danish sovereign Frederick III. (1648-1670) – the hammer came down at 21,000 EUR for this very rare piece (Estimate 15,000 EUR). The Middle Ages truly shone with bracteates, among others, from Meissen, as well as with Carolingians. The second-known denarius from Treviso of Louis the Pious, for example, easily left its estimate of 10,000 EUR in the dust, reaching a final price of 14,000 EUR. Ludwig’s youngest son, Charles the Bold, once had a penny minted in Aix-la-Chapelle. For a final price of 4,200 EUR (Estimate 3,000 EUR), the very rare coin finally returned to its hometown, likely to be on display there sometime in the near future. The highest final price of the auction week, however, was realized by the 1680 quadruple thaler of the Norwegian king Christian V – estimated at 50,000 EUR, it sold for 130,000.

There were also smaller denominations on offer, interesting trial pieces and a wide selection  of other very attractive lots in all three catalogues. They can also be found online at: www.kuenker.de.

Although there weren’t that many pieces on offer this time around for collectors of U.S. coins, those that were offered were all of outstanding rarity and quality. Consequently, almost all the prices realized were impressive and surprising, especially those of the undervalued fractions. An 1831-quarter from Philadelphia in practically perfect condition, estimated at just 2,500 EUR, brought in an astounding 17,000 EUR! An 1854 large cent from Philadelphia, which was in no way inferior condition-wise, far surpassed its very modest estimate of 150 EUR to sell for 1,700 EUR.

The results for the gold, however, weren’t at all surprising – a 50 dollar coin from 1852 from San Francisco, octagonal type and in very fine condition, sold for 16,000 EUR; the set of two pieces released for the 1915 Panama Pacific International Exposition in San Francisco sold for a very substantial 80,000 EUR.