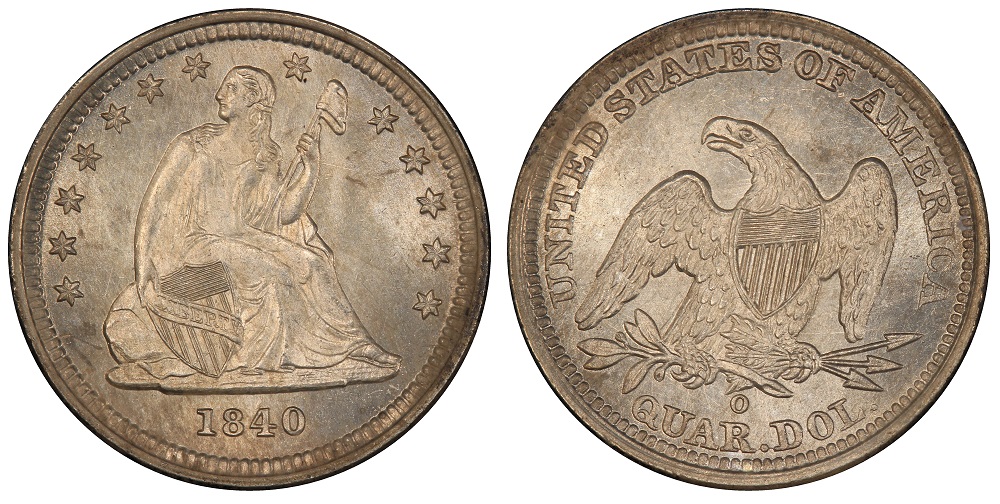 Q: Which of the branch mints was the first to strike quarter dollars?

A: The New Orleans Mint began striking Liberty Seated quarter dollars in 1840. The San Francisco Mint followed in 1855. The only other mint to produce quarters, other than Denver, which first minted quarters in 1906, was Carson City, which produced modest quantities annually from 1870 through 1878, with the exception of 1874.

A: These are minting errors rather than design varieties. There are actually two distinct die flaw error varieties, resulting in what appear to be extra leaves on the ear of coin adjacent to the wheel-of-cheese design element, the origins of which are still being debated. On the one variety, the extra leaf appears high and relatively straight under the left curl of the peeled-back husk on the corncob, while on the other the extra leaf appears low and curved. It has been variously posited that the “extra leaf” features on these coins resulted from die or hub clashing, or that they were tooled into a working die, intentionally or unintentionally, before the dies were hardened for press installation following the hubbing process. Both varieties command substantial premiums in choice grades, with the high-relief variety generally commanding 50 percent to 75 percent more than the low-leaf variety. While there are other error varieties in the 50 State Quarters Program, these are the only ones that enjoy general popularity.

Q&A: What is considered to be the most improbable example of a multiple major error coin?