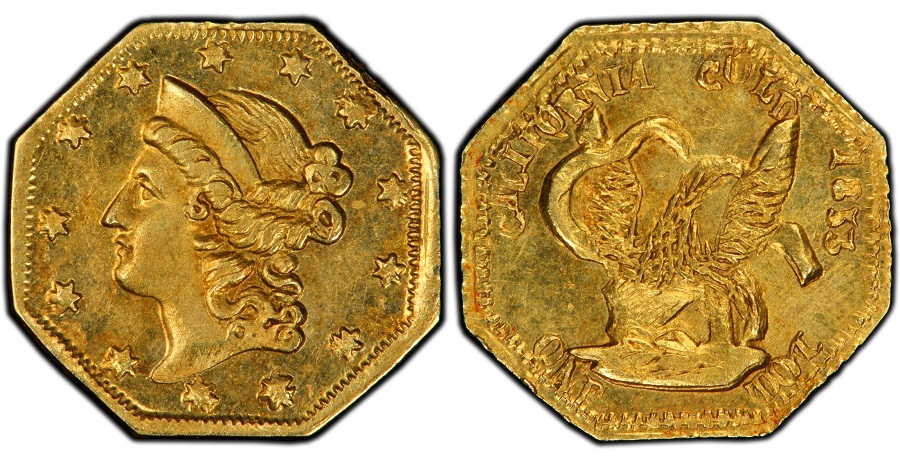 Q: What is meant by the term “Private Gold?”

A: In a simpler time—before the railroads bound the disparate parts of the country into a united whole—much of the country was separated from the financial centers of the East by formidable barriers of distance and primitive transportation. The developing industry and commerce of the remote parts of the country were burdened by a lack of sufficient U.S. coinage. Although no state or territory had the right to coin money, private sources in the gold mining areas of Georgia, North Carolina, California, Oregon, Utah, and Colorado endeavored to fill that need by issuing necessary pieces of various denominations and shapes. These do-it-yourself gold coins struck outside of the U.S. Mint are known as “Private Gold.” The issues of California, Oregon, Utah, and Colorado are sometimes alternatively referred to as “Territorial Gold,” as these issues preceded statehood.

A: California fractional gold pieces are gold coins of small denomination issued by jewelers, engravers, and goldsmiths to satisfy a need for small change that developed in California during the Gold Rush days. These tiny gold pieces were issued in denominations of quarter dollar, half dollar, and one dollar from 1852 to 1882, in both round and octagonal form. Genuine fractional gold pieces generally have a Liberty Head, Indian Head, or Washington Head represented on the obverse; a wreath or beaded circle on the reverse, or eagles on a couple of the half dollar issues. The “coin” issues were minted of gold, but invariably under weight, most being denominated and dated. While the Coinage Act of April 22, 1864, outlawed such private issues, that law was not sternly enforced until 1883. Commencing in the 1870s souvenir “token” issues were produced, most of which were of low gold content or gold plated and not denominated. In circumvention of the law, many of the “token” issues from the 1880s on were backdated to the 1850s and 1860s.