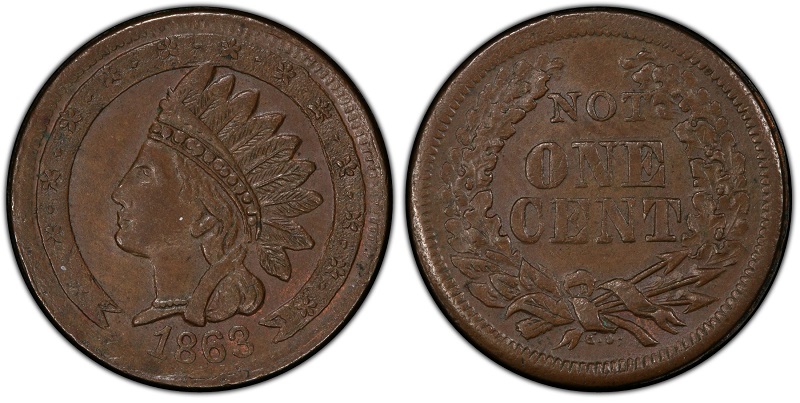 Q: I have a coin which is dated 1863, has an Indian head on the obverse, and is the same size as our current one-cent piece, but on the reverse it states NOT ONE CENT. Can you tell me what kind of a coin this is?

A: Your “coin” quite possibly served as such, but is actually a privately issued patriotic Civil War token. These were issued by merchants during a severe coin shortage of Civil War days to provide a small coin for everyday transactions. Many were imitations of the Indian Head cent which had at the time only recently been introduced (1859) into circulation; others bore representations of such traditional devices as the Liberty Head; U.S. shield, flag, and eagle; and portraits of the founding fathers. Most were made of copper; other compositions were brass, zinc, nickel, copper-nickel, and lead. They were finally outlawed by congressional action in 1864.

These tokens generally bore a device symbolic of patriotism or a patriotic slogan, such as THE UNION MUST AND SHALL BE PRESERVED. The most familiar of this type is the famous “Dix Cent.” On January 29, 1861, Secretary of the Treasury John Adams Dix ended a letter of instruction to a Lieutenant Caldwell with an unequivocal charge: “If anyone attempts to haul down the American flag, shoot him on the spot.” Inevitably, the slogan ended up on Civil War tokens, but due to an engraver’s error some examples read: “. . . shoot him on the SPOOT.”