The Perth Mint has started accepting website orders for a purple colored 2012 Year of the Dragon Silver Coin issued for the 2012 Brisbane ANDA Coin Show. Only 5,000 coins in special ANDA Coin Show packaging will be issued.

People born between the dates of January 13, 2012 and February 9, 2013 are said to be born in the Year of the Dragon. The dragon is the only mythological creature included within the Chinese zodiac. People born in dragon years are said to be confident, enterprising, independent, self-assured, brave and passionate. 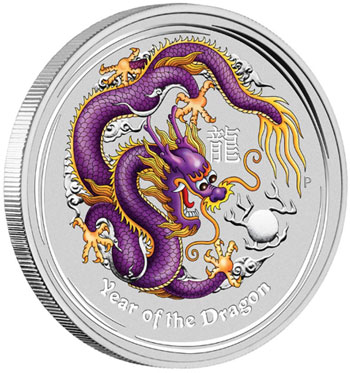 The 2012 Year of the Dragon Silver Coin depicts a purple dragon with the pearl of wisdom. The coin is struck from 1 ounce of 99.9% pure silver in specimen quality. The color purple is symbolic of wealth and is considered to represent purity and healing.

Each coin is housed in a display case with a shipper identifying it as The Perth Mint’s official 2012 Brisbane Coin Show Special, along with a numbered certificate of authenticity.

Colored 1 oz. silver Year of the Dragon Coins were previously released within sets offered by the Perth Mint, which have now sold out.