According to the US Mint’s website, the 2010 American Silver Eagle Proof Coin has been sold out. This represents an abrupt and somewhat unexpected end for an already tumultuous product offering. 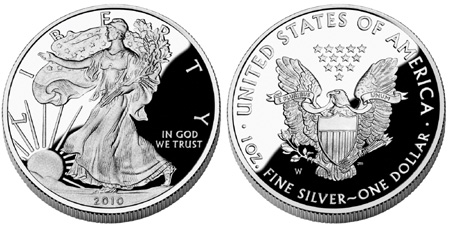 For much of 2010, the prospects of issuing a collectible proof version of the Silver Eagle remained uncertain. Under the law effective at the time, the US Mint was required to issue the bullion version of the coin in quantities sufficient to meet public demand. Since the Mint was falling short of meeting demand, all incoming planchets were sourced to the production of more bullion coins, rather than collector coins, which were not legally required. This sourcing led to the early end of production for the 2008 Proof Silver Eagle and the cancellation of the 2009 Proof Silver Eagle.

The first signs of hope for the 2010 Proof Silver Eagle came in July during a Senate subcommittee meeting. The US Mint Director made statements indicating that the Mint had requested modification of existing law to provide greater flexibility in producing the collector versions of the Gold and Silver Eagle, even if full demand was not being met for bullion coins.

Meanwhile, the US Mint was catching up with demand for bullion Silver Eagles, resulting in the lifting of the rationing program on September 2, 2010. With full demand being met, the door was open for producing collector coins. The US Mint officially confirmed the offering of 2010 Proof Silver Eagles on October 5, with sales beginning November 19. This was accomplished without a change to existing law.

Before and immediately after the coins went on sale, there were some issues with subscription and internet order processing. On November 11, the US Mint sent out a mass email to 100,000 customers who had signed up for subscription orders for products including the 2010 Proof Silver Eagle. The emails indicated that the products had sold out, a week before the official on-sale date. After several hours of confusion, it was confirmed that the emails were sent in error and subscription orders would be reinstated.

The week following the start of sales, the US Mint discovered that approximately 2,200 orders for 2010 Proof Silver Eagles had been deleted in error. The US Mint subsequently contacted the impacted customers and urged them to resubmit their orders with free expedited shipping to compensate for the inconvenience.

Despite these issues, the pace of sales for the Proof Silver Eagle was relatively swift. From the start of sales on November 19 through November 21, orders had reached 273,212. Two weeks later on December 5, total sales had reached 707,704. As of the most recent US Mint sales report, there were 834,879 units sold.

In the midst of the developments outlined above, the bill H.R. 6162 Coin Modernization, Oversight, and Continuity Act of 2010 was introduced. This bill would allow the requested flexibility for the production of collector versions of the Gold and Silver Eagle. The bill was introduced September 22, passed in the House September 29, in the Senate on November 30, and signed into law by the President on December 14.

Although the change in law was not necessary for the issuance of collector coins this year, it will provide greater flexibility for the coming year. The US Mint has already announced that the 2011 Proof Silver Eagle will be available for sale by July 6, 2011.