The release date and pricing information are available for the 2012 American Silver Eagle Proof Coin. This is one of the United States Mint’s most popular annual numismatic offerings. 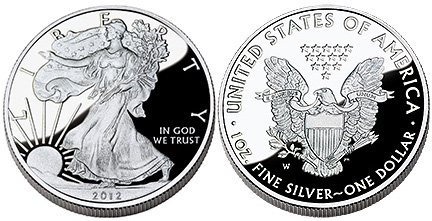 The 2012 Proof Silver Eagle is a collector version of the one ounce .999 fine silver bullion coin. The proof coins are struck at the West Point Mint and carry the “W” mint mark. The obverse design features Adolph A. Weinman’s classic Walking Liberty design, and the reverse features John Mercanti’s heraldic eagle design. The series was introduced in 1986 and collector proof versions have been offered for each year, with the exception of 2009 when the offering was canceled due to unprecedented demand for silver bullion coins.

A release date of April 12, 2012 has been established for this year’s offering. This comes more than two months earlier than the 2011-dated proof coin, which was first available on June 30, 2011. The 2010-dated proof coin was not available until November 19, 2010, as the Mint had struggled to get its numismatic offerings back on track following the cancellation of the previous offering.

Pricing for the 2012 Proof Silver Eagle has been set at $59.95 per coin. The price of the offering will remain subject to change throughout the period of availability based on the market price of silver. Last year, the coins had initially been priced at the same level, but then saw prices increased to $68.45 and later decreased to $58.95 before the eventual sell out.

The US Mint has not specified a maximum mintage for the 2012 Proof Silver Eagles. Also, there will be no household ordering limits imposed. Last year, an initial limit of 100 coins per household was in place for the first few weeks of sales. 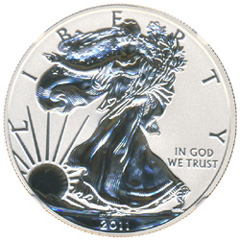 Besides the traditional Proof Silver Eagle, other collector offerings for the series may be available this year. Likely candidates include collectible uncirculated versions with the “W” and “S” mint mark. Other possibilities include proof coins with a special mint mark or reverse proof coins, which would be incorporated into a special set.

Within the United States Mint’s 2011 Annual Report, Deputy Director Richard Peterson indicated the US Mint’s plans to once again offer the uncirculated Silver Eagles with the “W” mint mark for 2012, as well as expand the offering to include the “S” mint mark.

Additional possible numismatic Silver Eagle products were revealed within a survey distributed to past customers this January. The survey specifically mentioned a special set containing two coins only available within the set, which would be offered annually. The two coins would be a proof coin with an “S” mint mark and a reverse proof coin with the “S” mint mark. Other possibilities mentioned in the survey were uncirculated Silver Eagles with a special mint mark, an ultra high relief version, or a reverse proof version. This year marks the 75th anniversary of the current San Francisco Mint, so it is possible that a specific product may be created to mark the occasion.

The US Mint has stressed that the survey was distributed to present options and gather collector opinions. The products and sets included in the survey will not necessarily be produced and offered to collectors.