A statement by United States Mint Director Edmund Moy indicates that 2010 Proof Silver Eagles may be minted and issued later this year, following a possible amendment to existing law. The status of the popular collector coin has remained uncertain due to the continued high demand for the bullion version of the coin. 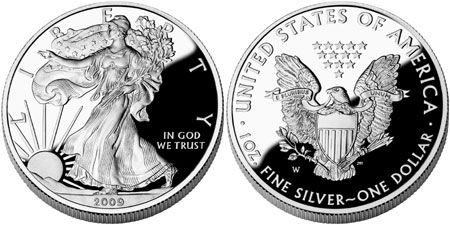 The American Silver Eagle has been produced since 1986. Each coin contains one troy ounce of .999 fine silver, with the weight, content, and purity guaranteed by the United States Government. Traditionally, Silver Eagles have been offered as bullion coins, distributed through a network of authorized purchasers, and as collector coins, sold directly to the public. Existing law requires that the United States Mint produce the bullion coins in quantities sufficient to meet the public demand, but there is no requirement to produce the collector versions of the coin.

During the past few years,the surging demand for physical precious metals has resulted in periodic suspensions and ongoing rationing of the American Silver Eagle bullion coins. Since late 2008, the US Mint suspended production of the collector versions of the coins, in order to source all incoming blank supplies towards the production of bullion coins. This has resulted in the early sell out of the 2008 Proof Silver Eagle and the cancellation of the 2009 Proof and Uncirculated Silver Eagle.

During a hearing on “The State of U.S. Coins and Currency” held by the House Subcommittee on Domestic Monetary Policy and Technology, statements by Director Moy revealed that the Subcommittee has been exploring the possibility of amending the law to provide the Secretary of the Treasury with the authority to mint and issue collectible versions of the American Silver Eagle, even if public demand for bullion coins is unmet. The United States Mint provided technical drafting assistance to accomplish the change, although it has not yet been enacted.

If the law can be changed soon, Director Moy indicated that the Mint could produce 200,000 of the collectible Silver Eagles per month. If production began in September, about 830,000 coins could be minted by the end of the year.