The United States Mint has started accepting orders for the 2013 Proof Silver Eagle. The release the collector coin comes amidst an ongoing sales suspension for the bullion version of the coin.

The American Silver Eagle was introduced in 1986 to provide precious metals investors with a convenient and cost effective method for purchasing a small amount of physical silver bullion to add to their investment portfolio. For each year of issue, with the exception of 2009, a proof version of the coin has also been offered for collectors. The proof coins undergo a specialized minting process which involves striking specially prepared blanks multiple times with special dies. The resulting coins have sharp details, frosted design elements, and a mirrored background for a cameo effect. 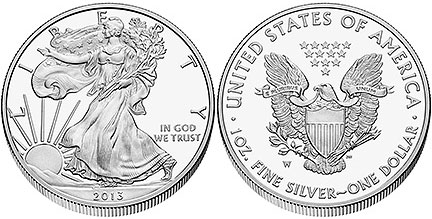 The 2013 Proof Silver Eagle features the Walking Liberty design by Adolph A. Weinman on the obverse of the coin and the heraldic eagle design by John Mercanti on the reverse. The coins are struck in 1 troy ounce of 99.9% fine silver at the West Point Mint and carry the “W” mint mark.

Pricing for the 2013 Proof Silver Eagle is $62.95 plus applicable shipping and handling. For additional information or to place an order, please visit http://catalog.usmint.gov/

Later this year, the US Mint has also scheduled to release a special two coin Silver Eagle set which will celebrate the 25th anniversary of the West Point Mint gaining mint status. This product is expected to be available during an ordering window in May/June and will contain a reverse proof and uncirculated version of the coin which will both be unique to the set. Separately, the Mint also plans to release a collectible uncirculated version of the Silver Eagle in May.