According to the United States Mint’s website, all available product options for the 2010 Proof American Gold Eagle have now sold out. Sales for the individual one-quarter ounce and one-tenth once coins ended today.

Proof Gold Eagles are collector versions of the 22 karat gold bullion coins. The US Mint had produced the coins for collectors each year from 1986 to 2008, before the offering was canceled in 2009. The return of the popular numismatic product combined with recent record high gold prices contributed to robust sales. 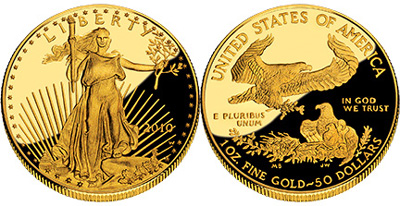 On October 7, 2010, the US Mint began sales 2010 Proof Gold Eagle, with five different product options available. This included individual one ounce, half ounce, quarter ounce, and tenth ounce coins, plus a four coin set containing one of each coin. The US Mint indicated maximum product limits, although final mintages were below these levels.

The individual one once coin was the first to sell out on November 1, 2010. This was followed by the individual one-half ounce coins on December 1, and the 4 Coin Set on January 3, 2011. Today, a sell out of the final two options was indicated.

The US Mint has provided an anticipated release date of April 21, 2011 for the 2011 Proof Gold Eagles. The bullion version of the 2011-dated American Gold Eagle previously went on sale January 3, 2011.