The United States Mint has begun sales of the 2011 American Gold Buffalo Proof Coins. These coins are a favorite of many collectors due to the .9999 fine purity and classic design. 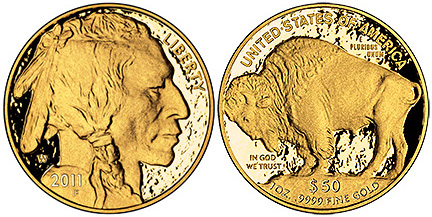 The American Gold Buffalo was introduced in 2006 and has been available in both bullion and collector formats each year. The design is based on James Earle Fraser’s 1913 Type I Buffalo Nickel. The obverse features the profile of a Native American chief, while the reverse features an American Bison or buffalo on a raised mound. Inscriptions on the obverse include “Liberty”, the date “2011”, and the mint mark “W” for the West Point Mint. The reverse includes “United States of America”, “E Pluribus Unum”, “In God We Trust”, the legal tender face value of “$50”, and “1 oz. .9999 Fine Gold”.

The 2011 Proof Gold Buffalo is offered without a stated maximum mintage and with no household ordering limits. The coins come packaged in a hardwood box with a matte finish and faux leather inset. A certificate of authenticity signed by the Director of the United States Mint is also included.

For the start of sales each coin is priced at $1,760.00 each. This price is subject to potential change, as frequently as weekly based on the average weekly London Fix prices. Orders may be placed online at http://catalog.usmint.gov/

The bullion version of the 2011 Gold Buffalo was released earlier this year on March 14. These coins are priced based primarily based on their precious metal content plus a mark up. The United States Mint distributes the coins through a network of authorized purchasers and does not sell directly to the public. For the year to date, the US Mint has sold 68,000 of the one ounce bullion coins.