The United States Mint has already provided scheduled and tentative release dates for the 2011 Gold and Silver Eagle Proof Coins. Although the dates are subject to possible change, they provide much more certainty about the popular offerings than available in recent years. 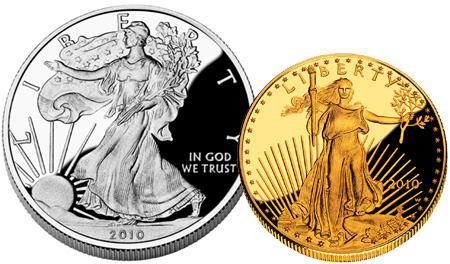 As demand for physical precious metals surged, the US Mint struggled to keep up with American Gold and Silver Eagle bullion coin production. By law, these coins are required to be produced in quantities sufficient to meet public demand. At times when the US Mint was not meeting full demand or the supply of excess planchets was insufficient, the production of collector coins did not take place. This had led to the cancellation or delay of collectible proof and uncirculated versions of the coins.

For 2009, all collector versions of the Gold and Silver Eagles were canceled. For 2010, the collectible uncirculated versions of the Gold and Silver Eagle were canceled. The 2010 Proof Gold Eagles were issued in four different bullion weights and as a four coin set beginning on October 7, 2010. Since this date, the individual one ounce, one-half ounce, and four coin set have sold out. The 2010 Proof Silver Eagle was offered for sale beginning November 19, with a sell out reported by December 28.

Based on a recently announced schedule product listing, the 2011 Proof Gold Eagle will be available starting on April 21, 2011. In the past, proof coin offerings have included individual one ounce, one-half ounce, one-quarter ounce, and one-tenth ounce coins, and a four coin set. The US Mint will also issue a collectible uncirculated version of the coin on May 5, 2011. This will represent the return of this product after two years of cancellation.

The 2011 Proof Silver Eagle will be available by July 6, 2011. The status of a collectible uncirculated version still remains unknown, as the product is listed as “TBD”. Last year, the product had also been listed as “To Be Determined” until the cancellation was eventually announced in October.