The United States Mint has sold out of the proof version of the James Buchanan’s Liberty First Spouse Gold Coins. This coin had experienced stronger sales than typical for the series due to the classic depiction of Liberty used for the obverse design. 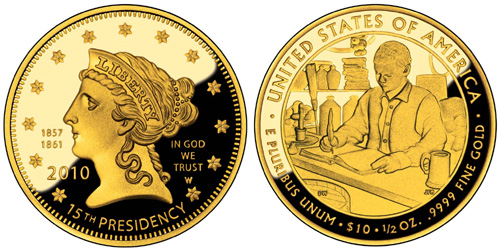 Although the broader series is intended to honor the First Ladies, in four instances the design features an image emblematic of Liberty as represented on a U.S. coin issued during the Presidential term. This occurs for the coins issued for the Presidencies of Thomas Jefferson, Andrew Jackson, Martin Van Buren, and James Buchanan, since each served without a spouse.

The James Buchanan’s Liberty Gold Coin went on sale at the US Mint on September 2, 2010. The obverse features a reproduction of the Liberty Head Quarter Eagle designed by Christian Gobrecht. This coin was originally minted and issued from 1840 to 1907. The reverse of the coin depicts a young James Buchanan working as a bookkeeper in his family’s country store. The coins were priced at $779 for the proof version and $766 for the uncirculated version, although prices were subsequently adjusted higher, following the increasing market price of gold.

The US Mint had announced a maximum mintage of 15,000 coins for this issue. However, based on demand forecasts, the US Mint only struck 13,000 across proof and uncirculated versions before the close of the year.

According to the most recent weekly sales report, the James Buchanan’s Liberty Gold Coin had recorded sales of 7,317 proof and 4,461 uncirculated coins, making a total of 11,778.