Just before the weekend, the United States Mint posted a “waiting list notice” for the proof version of the 2010 Boy Scouts of America Centennial Silver Dollar. 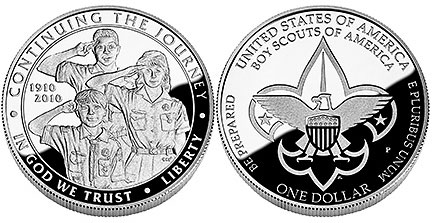 The notice indicates that the United States Mint has received orders sufficient to reach the maximum authorized mintage for the commemorative coin issue. This amount was set by the authorizing legislation at 350,000 coins across both uncirculated and proof versions. The production split between the two versions was determined by the United States Mint based on historical sales patterns and ongoing monitoring.

The uncirculated version of the coin has been officially sold out since April 30, 2010. The last adjusted sales figures indicate that 105,000 uncirculated coins were sold. The proof version had remained on sale ever since, with sales of 243,800 recorded through June 13, 2010.

The US Mint will continue to accept orders for the proof version of the coin for placement on a waiting list. Orders from the waiting list will be fulfilled on a first come, first served basis in the event that coins become available due to order cancellations.