Today, the Perth Mint will release the 2012 Proof Australian Gold Sovereign. This will represent the fourth annual release since the Perth Mint resumed production of the gold coins bearing the prestigious sovereign title.

During the 19th and early 20th centuries, the Australian mints located in Sydney, Melbourne, and Perth produced large numbers of gold sovereigns from locally mined gold. During this period, the Perth Mint alone produced more than 106 million of the coins. After a 78 year hiatus, production of the famous gold coins resumed in 2009 with proof quality examples struck for collectors in limited mintages. 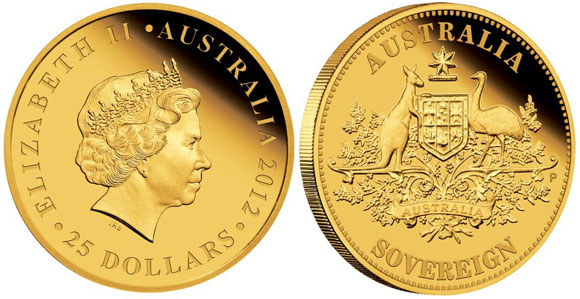 The reverse design features the Australian Coat of Arms with the inscriptions “Australia” and “Sovereign”. The Coat of Arms consists of the badges of the six States of the Commonwealth on a shield enclosed by an ermine border signifying the Australian Federation in 1901. The shield is supported on each side by a kangaroo and an emu. The Crest of Arms appears above the shield.

On the obverse is the Ian Rank-Broadley portrait of Queen Elizabeth II. Inscriptions include “Elizabeth II”, “Australia”, “2012”, and “25 Dollars”.

These coins are struck in the traditional purity of 91.67% (22 karat). Each coin has a diameter of 22.60 mm, thickness of 1.75 mm, and weight of 7.9881 grams. The gold content for each coin is 0.2354 troy ounces. The coins are housed in a presentation case with illustrated shipper and numbered certificate of authenticity.

Upon the official start of sales, the coins can be found in the