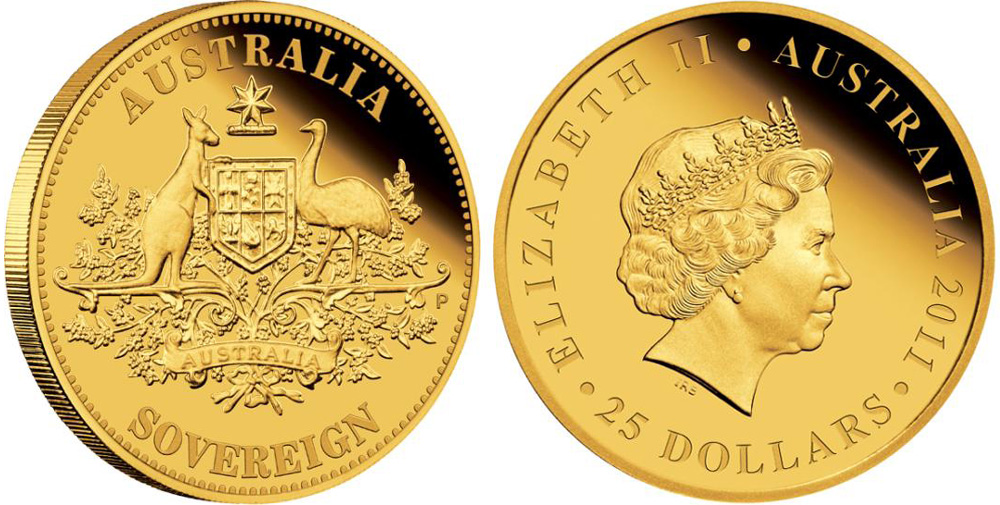 During the 19th and early 20th century, the mints at Perth, Sydney, and Melbourne had struck large quantities of sovereigns from locally mined gold. The Australian Mint at Perth had produced over 106 million gold sovereigns during this period. After a 78-year gap, the Perth Mint resumed production of gold sovereigns in 2009. The 2011-dated coin is the third annual issue since the resumption of production.

The obverse design of the coin carries the Ian Rank-Broadley portrait of Queen Elizabeth II. The inscriptions include “Elizabeth II”, “Australia”, the date “2011”, and the legal tender face value of “25 Dollars”.

The reverse design features the Australian Commonwealth Coat of Arms. This consists a shield with badges for the six states enclosed by an ermine border. The Crest of the Arms, including a 7 pointed star, is supported by a kangaroo and an emu to either side. The inscription “Australia Sovereign” is split above and below the image.

Each coin has a diameter of 22.60 mm and thickness of 1.75 mm. The gold content measures 0.2354 troy ounces. The coins are issued in presentation cases with an illustrated shipper and numbered certificate of authenticity.

The product page on the Perth Mint’s website can be found here.