The Professional Numismatists Guild (PNG) has announced the next three dates for PNG Days. These invitation-only events are held in conjunction with major coin shows around the country.  Complimentary invitations to attend can be obtained from participating PNG member-dealers or PNG headquarters.

The future dates include the first-ever PNG Day and PNG Share the Knowledge educational seminar held in conjunction with the annual Greater Houston Coin Club’s Money Show of the Southwest.

The upcoming dates and locations of PNG Days for the remainder of this year and next are: 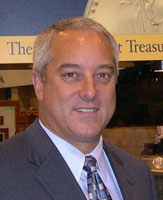 An educational seminar, “Navigating the Bourse,” will be presented by PNG President Paul Montgomery during the Money Show of the Southwest at 11:30 a.m. on Friday, December 4, in room 215 of the convention center.  A complimentary light lunch will be available for attendees, courtesy of the PNG.

“Navigating the ‘shark infested waters’ of a numismatic bourse floor really is not that tough, and should not be intimidating for collectors or investors.  Many coin dealers are there to help; however, there are some unwritten and oftentimes unspoken protocols that can determine your success or failure,” explained Montgomery.  “The seminar will guide you through a few easy, logical steps to make your coin show experiences worthwhile and rewarding with smooth sailing.”

For additional information, contact the Professional Numismatists Guild by phone at (760) -728-1300, email at or online at www.PNGdealers.com.